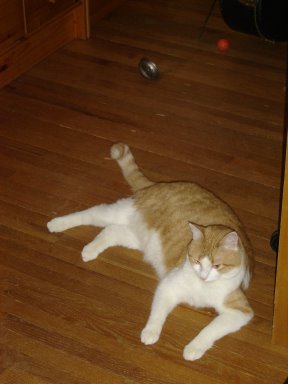 That metallic object in the background is . . .

. . . the strainer from the kitchen sink.

I found it here in the opposite corner of the house, so I'm guessing that it gave him some considerable amusement as he batted it along.

Nothing is safe from him now, unless it's behind a closed door. I expect we'll soon be needing latches installed on the kitchen cabinets.

It's his electrical cord fetish that's the worst, though. I'm amazed he hasn't chewed through a live one yet. I forgot and left the sustain pedal for the keyboard on the floor, and not twenty minutes later, I found the cable nearly severed. I have cords tucked into gaps under baseboards, cords shielded behind boards braced behind furnishings, cords taped up along furnishings . . .it's starting to look like a choice between him and electricity!
Posted by arcolaura at 2:51 p.m.

My dog Sadie liked to chew through the wiring harness on my trailer. I finally broke her by spraying it with a lite coat of WD-40.

We tried Tabasco sauce, and he licked it off.