I notice native plants in all sorts of places. This fall, with so little snow, and those ten days or so where I was walking Mom and Dad's dog two or three times a day, I've noticed numerous native plants around the edges of town. I kept thinking I would like to take some pictures and show how much you can figure out about the plants even in the dead of winter. Again and again I noticed beautiful late afternoon light, but didn't have the camera with me. Finally, yesterday, between listening to my daughter's woes about her busy schedule, and getting her fed before dashing off to curling tryouts with the Air Cadets, I snatched up the camera and went out for a quick walk.

It was a dull, grey day, not at all like those ideal days that I've missed, but I took pictures anyway. Almost fifty of them. Today I'll start with a few fun and easy plants. Tomorrow the grasses! 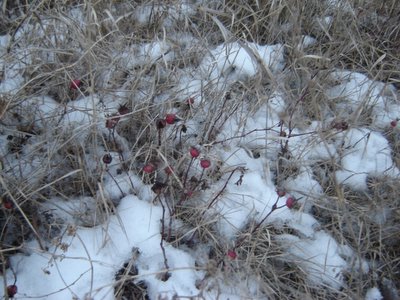 Rosehips can catch the eye, even if you're not looking for plants at all. These very low-growing roses (only about 10 to 15 cm tall) are probably Rosa arkansana, or prairie rose. They are persistent little plants, showing up in old seeded pastures and clinging along roadsides "between the grass and the grader blade," where they sometimes make a bright border of white-to-pink blossoms that almost hide the tiny shrubs beneath. I say "probably" prairie rose, because I didn't actually check for any identifying characters, just assumed on the basis of size and location. We have a couple of other rose species here, but they are usually larger shrubs, not found scattered in open grassland but rather in shrubby patches or as understory in woodlands. 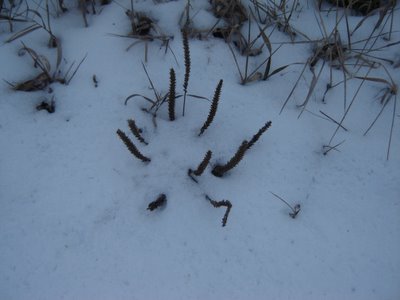 Plantain, and probably not one of the native species. If I wanted to be sure which one, I would dig away the snow and look for leaf remains. Since it was growing on the edge of a dirt track in the old "brick ponds" area, I would expect to find large, oval-shaped leaves telling me it's Plantago major, common plantain, also known as "Whiteman's-foot" because it came into the area with Europeans and seemed to appear wherever they went. 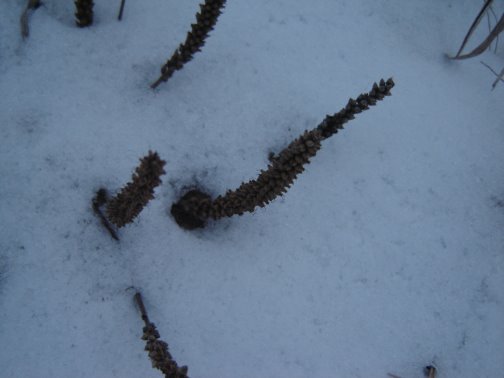 There is another plantain with fairly broad leaves in the area, Plantago eriopoda, but its leaves are quite a bit narrower than common plantain leaves, and it has some wonderful brown wool in the crown (the base of the plant where all the stems and leaf bases arise - hidden in the snow). P. eriopoda also tends to favour saline soils, instead of showing up all over.

I was going to give you one more, but the kids are home. Check back tomorrow - hopefully I will have time to start to tell you how I know these plants.
Posted by arcolaura at 2:02 p.m.

The rose hips I know (and love) from our brush filled fields. I've seen the Plantain but never knew that was what it was called. Thanks for the ID!

That was a new name for me, too - this promises to be a great "get to know the neighbours" series for me. Looking forward to the next installment.