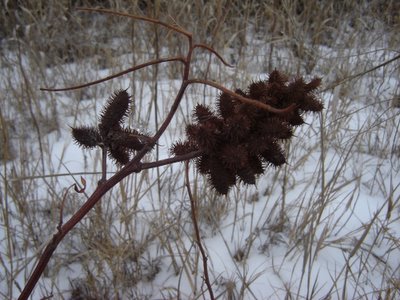 Makes me wonder why it took them so long to invent Velcro.

That's wild licorice, Glycyrrhiza lepidota, native to this area and found through much of the Great Plains. Yes, it's a close relative of the ancient herb known as licorice, according to this informative page. Apparently the roots are the sweet part, eaten raw or baked. I haven't tried them, but I am quite curious, because I love licorice candy.

In terms of broader relationships, it's a member of the Bean family, or Fabaceae. There's not a lot to see here to tell you that, except that if you brave those little hooks and cut through the bur, you'll find that it's actually a pod with hooks all over its shell. I am realizing that in winter, I do a lot of my ID just by sheer familiarity.

And yes, in winter the whole plant is indeed a rich red-brown. It jumps out at you from its backdrop of pale dry grasses. 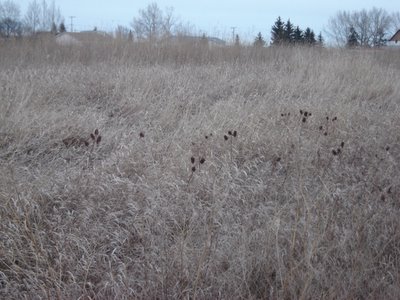 Like all bur-bearing plants, it seems to literally jump out at you, even when you pick your way past.

That brings me to the other part of today's sticky topic: gumweed. 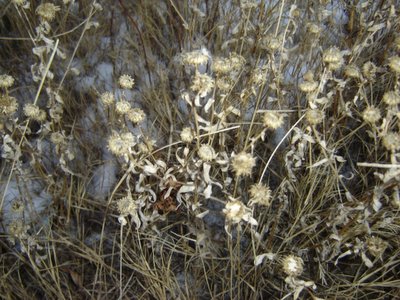 I learned a new word today: squarrose, meaning "with parts spreading or recurved at the end." And recurved means "curved backward or downward." Now take a close look at the heads of gumweed, or Grindelia squarrosa. 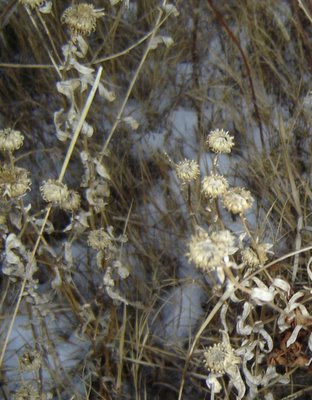 See the little curls around the edge of each head? Those are bract tips, curling out and down. In summer, this plant has bright yellow "flowers" which are actually composite heads of tiny florets. Such heads are typical of the plant family formerly known as Compositae (now called Asteraceae). Think of a dandelion; from one dandelion "flower" there suddenly appears a dome of hundreds of tiny seeds, each of which formed from a single floret in the dandelion head. Gumweed "flowers" look a bit like dandelion "flowers," except that each has a definite central disc with rays around it, like a daisy (also a member of the Asteraceae). Each ray belongs to a separate floret, and the central disc is made up of tiny florets also. Think of a sunflower; each seed forms from a separate disc floret.

Those of you farther south in the Great Plains may see other species of gumweed, but G. squarrosa is the only species found around here. The "weed" part of its name is very apt, since it is often abundant along roadsides and railroad grades, or across the less-used parts of industrial yards and gravel pits. It is native here, though, and sometimes provides a patch of colour just above a slough margin in a pasture.

The "gum" part of the name is even better. The bracts of the heads are so resinous that even in deep winter, or into the next growing season, the heads on a dry old plant will still feel gummy to the touch.

That concludes today's sticky topic. I have a T-shirt from the Native Plant Society of Saskatchewan, with illustrations of numerous burs, and a caption that says, "Stick with native plants."

Speaking of the NPSS, the annual general meeting and conference is coming up, February 9th to 11th in Yorkton. There will be speakers about climate change, invasive plants, seed testing and grading, and conservation programs. There will also be workshops on identifying weeds, identifying our native orchids, and botanical linedrawing. There's also a member slide show that's always fun, and of course there's the usual great food and great people. The registration brochure is here (pdf).
Posted by arcolaura at 1:42 p.m.

I'm not the most nature-observant person in the province, but I don't remember seeing either of these plants. I'll have to look a little harder next summer.