Unable to travel home for Christmas due to a new batch of puppies, Kate got nostalgic about taking the snowmobiles out to chase hares and gaze at the stars. The truth is, there wasn't much snowmobiling action for her to miss around here, although the hares would have a tough time hiding in their white coats. 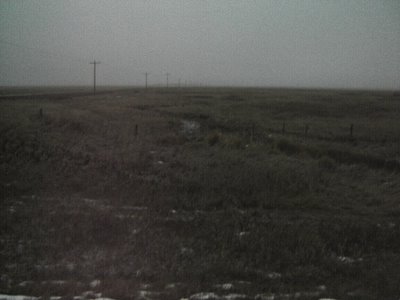 Sorry about the dim photo, but that's about the best I could do at 5 p.m. on New Year's Eve. Another unusual thing about this view (looking north from the highway just west of Arcola) is that you can't see the hills, only about 3 miles away and rising nearly 400 feet above this plain.

When I compare these records with the partial data for Handsworth (in the hills west of Moose Mountain Provincial Park) and Willmar (south of Arcola), it seems to confirm my suspicion that we often have snow when Estevan doesn't, and the hills may have snow when the nearby plains don't. Handsworth had 6 cm on New Year's Eve 1986, and 7 cm in 1987. Maybe there weren't any brown Christmases at the farm when I was growing up, after all. I don't know what the snow is like over at Handsworth this year, but when I drove out to the farm yesterday, the hills were still looking very brown here.

Daily precipitation and temperature records are available for many more stations and much longer periods than the snow depth data. I wonder how hard it would be to model probable snow depth from those records, to estimate how many brown Christmases there were back in the early 1900s. It might be easier and more accurate to just ask around among the old-timers. Hopefully their memories are better than mine.

Anyway, if you're wondering how I marked the turning of the year, I didn't. It passed quietly sometime while I was exploring tables of snow depths. Garth was incommunicado in Pokhara, Nepal; otherwise it would have been fun to do a couple of phone smooches, once when midnight swept by over there, and again when it finally got around to us nearly twelve hours later.
Posted by arcolaura at 3:18 p.m.

It was pretty quiet here, too. We were supposed to go to a friend's party, but there was freezing rain and I wanted to live into the new year, so we stayed home and watched Peter Seller's movies. The kids found it festive, we found it restful. I'm too old for midnight revels!

When I think back sentimentally about New Year's Eves past, what I remember most is lying on the couch at home, after everyone else had gone to bed, with no lights on except the Christmas tree lights. There were just a few of those lights that blinked, on and off, at a leisurely rate. I was listening to the Billboard Country Countdown of the top 100 songs of the year, and watching the gently shifting patterns of coloured light and pine-needle shadows on the wall.