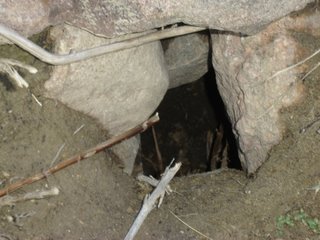 Sorry for the lack of scale - it was just a quick snapshot during a family outing last week, taken by Garth because I didn't feel like scrambling down the rocks with my tired back. As I recall, the opening is perhaps three inches across at the base. It was just after that heavy rain, so there weren't any footprints visible to our untrained eyes, but there was abundant evidence that somebody was spending considerable time just outside this hole. 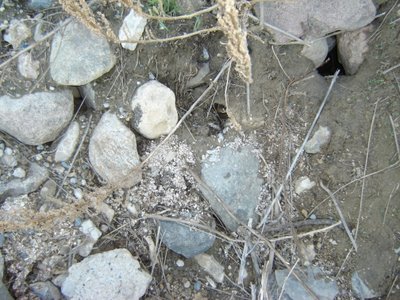 The hole is in the top right of this picture, and the pinkish-white debris scattered from the centre to the lower left consists of bits of crayfish exoskeletons. We found some more-or-less intact exoskeletons among the rocks as well.

The setting is a mostly-rock road embankment, with very large steel culverts (perhaps 10 feet in diameter) to the left and right, the gravel road surface above, and the waters of Moose Mountain Creek below.

Update: Chive at Maison Madcap says it's a mink. That's what I had guessed, too. I've never seen one, except in Algonquin Park in Ontario, poking along the shore where we had cleaned some fish nets at the research station. They are widespread across Canada, but mostly nocturnal, so it's not surprising to find their sign without ever seeing one.
Posted by arcolaura at 10:41 a.m.

Hmmm. I don't think you have raccoons in Saskatchewan, do you? And besides, a three inch hole would be too squinchy. Hmmm. Hmmm. Curious. I'll ask Chive later what his guess might be.

We do have raccoons, but I agree, that hole is too squinchy.

They love the water and they eat crayfish.

I'd say Chive is right. I've never seen one in Saskatchewan, but I'm sure they're here, and the creek would be the place to find them.

We have mink here, too. I saw one wild for the first time this past winter, playing along the river's edge on one of my hikes. Even got an adequate photo. "Mine" seemed to live in a burrowed hole, though.