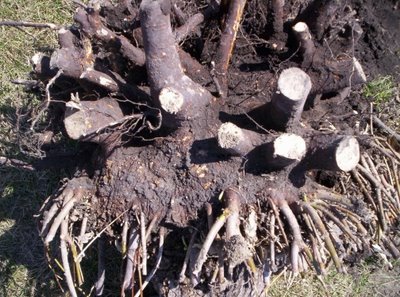 Manitoba Maple
(Acer negundo)
That is, part of it, upside down.
My biggest project since preaching about wisdom written in the trees has been to cut down this tree and dig it out of our garden plot. 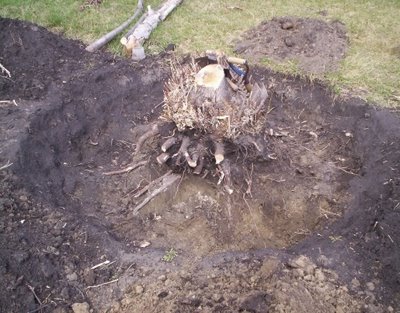 That's one very large weed. Why anyone would tolerate a tree in a garden plot, I don't know, except to admit that I myself was tolerating it, in a live-and-let-live sort of spirit, until I started thinking about growing enough vegetables to actually live on. I don't expect to achieve that goal this year, but we're moving in that direction.

I'm notoriously meticulous, but I am learning to value timeliness as well. I wouldn't have been nearly so meticulous about trowelling in around the roots, except that: 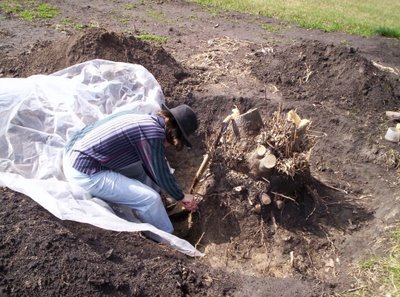 The plastic is just keeping my bottom dry. This was less than two days after we had two inches of rain. Where did it all go? I had thought I would be pumping water out of the hole, but that clay in the bottom was hardly even muddy. 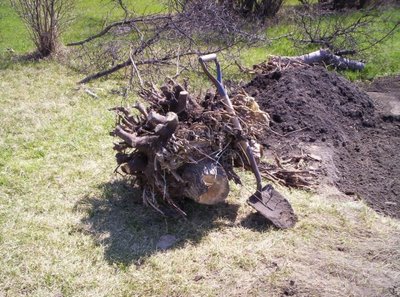 Accomplishment. As it turns out, I did have some help. (Notice that I've started calling it "our" garden.) Garth kept talking about borrowing a winch truck (partly in the interests of timeliness, but mostly just for the fun of it) but eventually he came along with a crowbar and a great freedom from meticulousness, and the job was done in a flash. Mind you, lunchtime arrived in a flash, too. There's nothing like some good hard work to make the time fly by.

In the background above, you can see some pieces of the original tree. I took it down in sections, working with a hand saw, first from a stepladder to get the lower branches, and then from an extension ladder propped against the denuded trunk to reach the branches of the crown. It felt a little odd, dismembering a tree while leaning against it for support.

Here's another look at the underside of the stump. The crown of trimmed suckers is visible along the upper right edge. 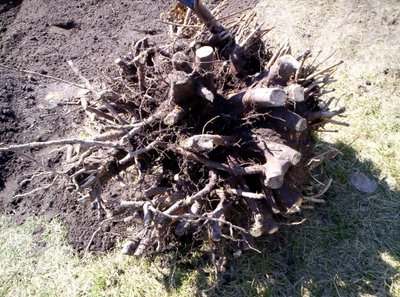 There isn't really a main root at the bottom, although there was one a bit thicker than the rest. In this picture it's mostly hidden behind smaller roots, below centre left. Most of the thick roots branching out closer to the surface seemed to run outward with a slight downward slope for a foot or two and then turn more sharply down into the subsoil.

The stump has quite a thick mass of woody material that used to sit just at the soil surface. I am wondering if it would have an interesting grain to it, like a burl. If any of my local readers want to try cutting it, it's yours for the taking. The early bird gets the worm.

That's a big job. We had to remove a lilac from the front of our house when we first moved in (so I didn't run over people while backing out the driveway), and the roots went on forever and ever. Eventually we had to get someone to come in and grind them out so the wretched thing wouldn't keep growing back.

You earned that lunch!