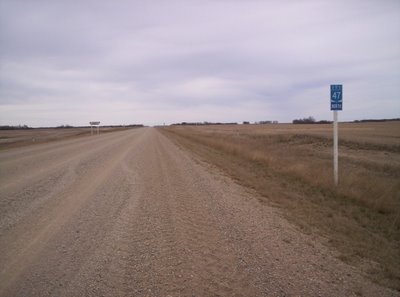 It still has a sign, but it really doesn't look like a highway anymore. A few years ago it won first place in a contest to select the worst highway in Canada. Now I see that MapQuest gives it a dead end a little bit south of Highway 48 near Peebles, but it's really quite a passable gravel road.

Sometimes gravel is better than pavement. Around the same time that 47 won that contest, we were choosing to drive on the gravel grid road #620 north of Sedley instead of the paved Highway 35 north of Francis because the potholes in the pavement were so bad. I guess 35 was even worse south of Weyburn, where it earned a dishonourable mention in the contest. But between Francis and Qu'Appelle, it was bad enough to inspire a song chorus. I was on my way to PCTC, tight for time, but in high spirits. This was the result.