When we lived in Regina, we said we would never again buy a house with a north-facing driveway. 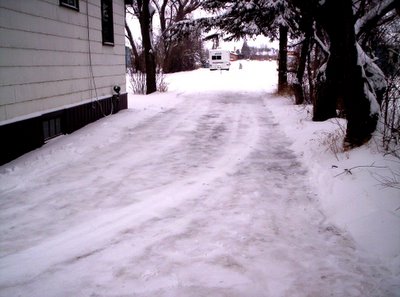 Oops.
But for some reason, it doesn't seem so bad. My guess is that we don't drive as much, so we get it shovelled before we pack much onto it.

It's not a terribly long driveway. I only shovel the paved part, and let the loop around the other side of the house fill up with snow. That way the grader operator has enough frontage for dumping his windrow, so he doesn't slop it over the main driveway. This year, though, we had so little snow, they didn't even start grading until a week or so ago, and I guess they forgot which end of the driveway to bury. Not enough traffic to make it obvious.

Anyway, while I was shovelling the dearly welcomed four inches or so of fluffy white stuff Wednesday evening, I was thinking about doing a photo essay about the chore.

What would be the point of that? Evidence that I actually work sometimes? "See Laura work! Work, Laura, work!"

I was thinking I could make a "how-to" post out of it - "How to Move a Lot of Snow." I had worked out such a clever pattern to minimize the work. I pushed as much snow as possible on each journey down the driveway, and never wasted effort moving it back and forth while gathering it up. I had a path cleared, just the width of the shovel, all the way down the driveway. Starting at the far end, I'd push snow across the width of the driveway, and into the start of my path. Once more across to catch the stuff that fell off the side of the shovel, and I had a big pile in the start of the path. It was all I could push, but almost all of it went down the path, held in by the ridges left on previous trips. Working this way, I didn't need one of those great heavy snow scoops with sides on it. Just an ordinary wide-blade snow shovel.

As I cleared my way down the driveway, the path to the back yard got shorter and shorter, and shinier and shinier. I wish I could have got you a picture of the times when I misjudged and made the pile in the path too big for my snowboots' traction.

I worked out an extra trick for pushing a lot of snow without getting stalled by the extra resistance where it hasn't been moved yet. I'd section off an area of snow by pushing a cross-wise path through it, and then work back across, clearing the section into the path with that rhythmic scoop-and-toss pattern that most people use to just windrow the snow along the side of the driveway. Then I'd push my whole cross-wise windrow over to the main path and away I'd go.

Now, you might be wondering why I don't just do it the way most people do, and pile the snow along the side. Here we come to the rationalization I invented for calling this a "how-to" post. You see, a how-to article should really address something useful, or as Contrary Goddess puts it, something that contributes to the community. I figure my contribution is that I leave extra room in that narrow tree-row for the neighbour to pile her snow. Less work for her.

The beauty of it is that my technique involves almost no work at all. If I did that scoop-and-toss thing up into the tree row, that would involve a vertical displacement of the snow. My scoop-and-toss is really more of a push-swish thing, and as my engineer father loved to remind me when I was lugging hay bales, it doesn't matter how far you move something along, there's no work involved unless you move it up. Work is defined as, oh, I forget, something times height.

Yep, Dad. If I was a proper diligently efficient adult and just pitched that snow into the tree row, that would be work. When I cleverly channel-plow it all into the back yard, that's pure play. 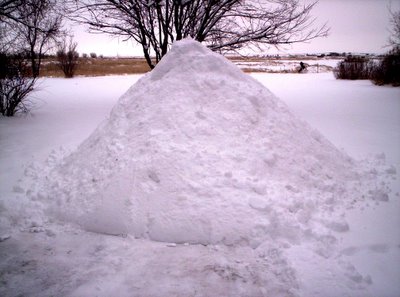 I know, I know, there's some vertical displacement involved in making that pile. Believe me, I know.
Posted by arcolaura at 12:44 p.m.

There are so many things I love about this post...

The detail of your description.

The logic of your technique.

The simple fact that you're thinking about blogging while you're shoveling.

That you're thinking about your neighbor and your father as you're shoveling.

That you're thinking, thinking in great detail all the time. There's just not enough of that going on in the world. Keep spreading the word.

Wow! Thanks! And here I thought it was kinda frivolous...

I have developed such a ritual for shoveling snow off our pond for skating, it's almost like an act of meditation doing the shoveling. Very relaxing really, even though my body is working hard. We just got six more inches yesterday.