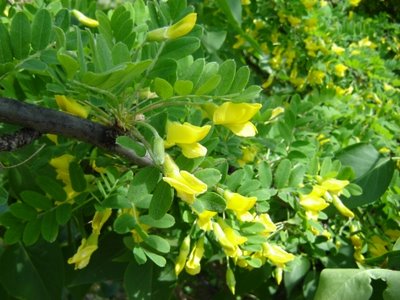 "Mom, is it true that caragana flowers are poisonous?"

I had been wondering the same thing. Was it true, or was the warning I recalled from my childhood just a precautionary "might-be," or even just something somebody made up? My younger sister recalls some shockingly fanciful stuff that I reputedly declared to her as gospel, back when our age difference was more significant.

Ruth decided to go ahead and try one. She explained that she had seen kids eating them off the hedges as they walked down the street. "I'm not gonna die, Mom."

She announced that it tasted like a very sweet pea. She chewed a bit longer. "No, asparagus."

I didn't notice the asparagus aftertaste, but the first flavour burst is definitely sweet. According to the USDA Plants Profile for Caragana arborescens, under "Palatable Human," the answer is "no." No? Heck, if I was sure they wouldn't hurt me, I'd eat those flowers by the bowlful. The USDA Plants Profile also says, "Toxicity: None," but should I believe them?

When in doubt, check some more sources. That's my modus operandi. Sooner or later I usually find one that specifically addresses the conflicts among the others. Then it's a matter of deciding whose supporting evidence and arguments look more solid.

I must admit, though, I'm beginning to look more favourably on the direct experimentation technique. No ill effects so far...

I wonder, what are the chances of eating a flower with a stinging insect inside?

Ahem. Back to the research. Look what I found! Plants For a Future - a database of "Edible, medicinal and useful plants for a healthier world."

In the entry for Caragana arborescens, it says:

Reports that this plant contains toxins have not been substantiated[65]. The occurrence of cystine in the seeds is doubtful[65].

And furthermore, it suggests that the seeds can be cooked and used in spicy dishes (to compensate for their bland flavour), and the young seedpods can be cooked as a vegetable. Here I've got a potential staple food growing on a perennial shrub right next to my garden! (But - see update below.) It's a nitrogen-fixer, too, so it might be enhancing the soil nearby. Garth's mom took a look at my garden, when I asked her advice about how far to dig out the Manitoba maple roots, and declared that my vegetables didn't stand much of a chance with those "hungry" caraganas right next door. But I had to wonder, why is the grass so lush between them and the garden plot? 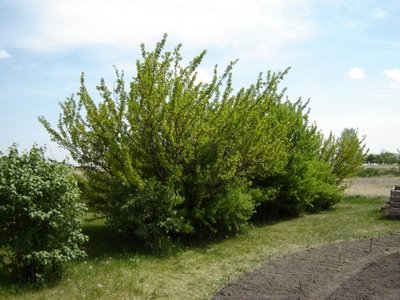 Some people hate caraganas. It's sort of a prairie pastime, to complain about them. I can't blame Garth's mom, since she has been struggling for years to eradicate volunteer caraganas from the bush and hedgerows all around her yard. Earlier this spring, when I suggested to Garth that he cut down a caragana that was crowding our path to a shed, he looked positively gleeful.

But at that point, he didn't know you could eat them. 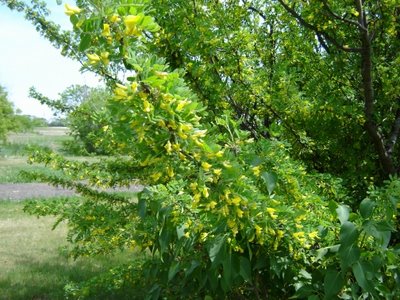 UPDATE - I just looked again at the "Plants for a Future" page about caragana, and way down at the bottom there is a comment from a reader claiming that she nearly died from eating raw caragana pods as a child. Back to the research...

UPDATE 2 - My "check more sources" method is working very badly so far. I have found numerous sites that simply list plants as safe/non-toxic or as poisonous/toxic, and caragana makes appearances on both lists, sometimes even on the same page. What's really frustrating is that none of these sites mention what the toxic compound might be. One direct observation of my own gives me pause. Considering that this obvious legume seed has been available right next to subsistence gardens for a long time, why haven't people developed a tradition of eating it? Could it be that there's a good reason? I read that people in Siberia used caragana seed to carry their poultry through lean times, so it's not like they didn't recognize it as a harvestable crop.
Posted by arcolaura at 2:09 p.m.

As a kid we ate Caragana blossoms all the time. I'm pretty sure that none of us ever keeled over and expired. It is one of those taste memories from childhood. I didn't realize how strong a memory until I moved up here. Inuit eat the root of an Oxytrope that they call Aira. They eat it raw or fried in butter. The first time I tried it Leah just pulled some out of the ground and said "Here try this." As soon as I tasted it I instantly flashed to growing up in Manitoba. I knew it was a taste from then but I couldn't pin it down. A short time later I realized it was Caragana, which makes sense seeing as they are both legumes.

Thanks, this is more than one time you've talked about a plant and made me realize, "hey! That grows here, and I've been wondering what it was!"

I think we probably have many plant similarities in our respective areas.

Hi Clare - thanks for stopping by. An Oxytrope? That's intriguing - we call our local Oxytropis species "locoweeds" because of the effects of their alkaloids on cattle.

Deb - it's an introduced plant from Asia and eastern Europe, but quite widely distributed through the northern U.S. and Canada. Around here it seems to stay where it's planted, but I think it might be naturalized in areas with more bush. Apparently it likes a cold winter, and doesn't do well farther south.

I don't know if it counts as "naturalization", but up here the darn stuff will spread and spread and spread from the original planting site. I like caragana (not everywhere, but some wheres), but goldfinches love it. They get lots of hiding places, and maybe nesting too?, and the branches are so fine that they won't support the weight of a cat. In our first house, there was a 10' caragana hedge that cozied up to the kitchen window and I got to watch the little birds coming and going all the time.

I used to nibble on caragana pods for taste mostly [didn't swallow much as far as I recall]. I think I can recall the taste even right now, and want to try some, but alas I don't remember if any grow anywhere in Yorkton.

Other plant foods that go unused include radish pods, and all sorts of flower petals.

Thank you for this post. My daughter just came back from the playground eating caragana pods. A quick web search reveals that, as you say, they are poisonous but they're not entirely bad because you can eat them. The eight-year-old in question seems to be doing okay, and since the hypothetical symptoms are diarrhea and vomiting it should be easy to spot problems. "Dad, can I have a drink of your coke?"
"Not until I'm sure you're not going to die. That would be a waste." Her siblings informed me that I'm not a fit parent. I'll let you know if she becomes ill, but right now I'm inclined to doubt it.