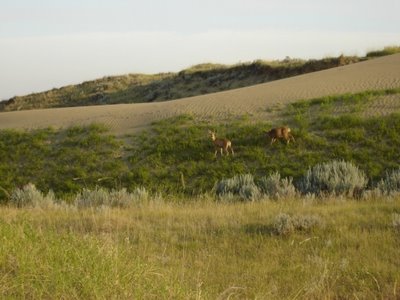 Mule deer on a dune partially revegetated with lance-leaved psoralea or scurf-pea (Psoralea lanceolata)
Alright, here's a bit about where I've been lately: the Great Sand Hills, in southwestern Saskatchewan. I find it fascinating that you can see the outline of the sandhill area on satellite imagery and on landcover maps derived from it. So much of southern Saskatchewan is in cropland that the major native grassland areas show up in contrast. One of these areas is the Great Sand Hills, where the soil is too sandy for annual crop production, and much of the topography is stabilized dunes, too choppy for any sort of cultivation. To me, the outline of the area looks a bit like a chess knight, or the upper part of a seahorse, in profile, facing right. See if you can see it on the landcover map when you zoom in on southwestern Saskatchewan. Look for a pinkish area south of the big bend in the South Saskatchewan River west of Lake Diefenbaker. Once you see it on there, try it on Google Earth.

I joined the Plant Team, doing rare plant searches and range health assessment as part of the Great Sand Hills Regional Environmental Study, for ten days in the latter part of July. The team, with somewhat shifting membership as knowledgeable people were available, had been living at this rented ranch house in the west central part of the sandhills since late May. 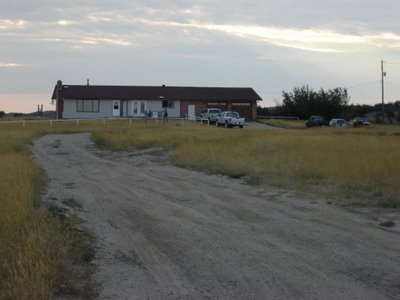 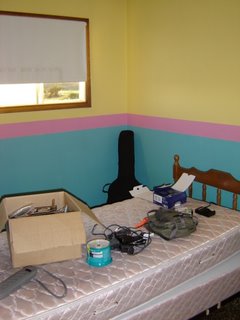 I took the last available bedroom. Hmmm - am I going to like this? Maybe once I take over the bed.

At least I had my guitar along.

Actually, I abandoned this room partly through my stay, and rolled out my sleeping bag in the basement rec room. Others did the same, and soon somebody commented about the refugee camp in the basement. It was just too hot upstairs in the early evening, when we were trying to get to sleep so that we could wake up and look lively at 4:30 a.m. At first we tried to leave the house at about six, but we gradually worked it back even earlier, so that we were arriving on our sites at about six. By eight o'clock in the morning, you could already feel the heat, and by the time we finished our last site of the day in the early afternoon, we were really needing some shade. Or an air conditioned truck. The drive back to the ranch was good for that. Often it was forty-five minutes; for some sites it was double that. "Oh, I drive a truck for the environment . . ." 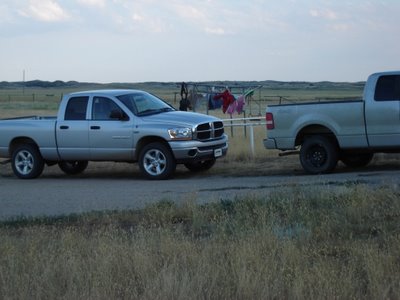 At least I got to hang my laundry out to dry. I was amused and disturbed by the inconsistencies of our situation. At home I haven't even got around to putting up a clothesline, but I drive a tiny car, or bike, or walk. Out at this ranch, the plant people had brought along eco-friendly cleaning products and strung up a clothesline, and someone objected to the plastic sandwich bags I bought in the convenience store on a trip into town because I had forgotten to bring a reusable sandwich box - and we spent our days driving monstrous trucks all up and down the countryside. (Well, that and walking all up and down our sites.)

There were reasons, of course. We had to have vehicles with high clearance, to keep from dragging bottom or starting the crispy-crunchy-dry grass on fire. And part of the study design involved spreading the work over the whole area through the season, to avoid bias, so we couldn't just start at one end and camp our way across the area to save on driving.

Couldn't we just skip the study altogether? One team member was keen to see this study help to "keep them out" - to protect the sandhills from gas development. I reminded her that most of us depend on this gas to heat our homes each winter. As we discussed it further, she was shocked to learn that gas and oil development is often unwanted by landowners, but ultimately there is nothing they can do to stop it. If they refuse the developer's offer for a surface lease, and try to fight it, then an arbitration board will step in and tell them what they will be paid for the surface lease. They have no choice about giving a lease. Stepping back to look at the bigger picture, if some ranchers and environmentalists and concerned citizens band together and get some tighter planning restrictions on gas development in the sandhills, how long will it last? Eventually the pressure to get that gas will be too great, and the restrictions will be lifted.

But maybe the study will suggest some ways to do the development better, with less impact. I don't know. That wasn't my reason for being there. I just had fun wandering up and down sandhills, seeing the 360-degree vistas from the crests of dunes, bantering with my teammates. More than once I said I would do this work for free. When W saw me struggling up the side of a blowout, throwing the quadrat frame ahead of me and then lunging upward on all fours, he asked if I still felt the same way, or if maybe they weren't paying me enough for this. But I was still happy, just a bit embarrassed that I had tried to scramble up the steep and sliding sand instead of taking a long way around where the slope was easier, and feeling foolish with him standing up there watching me.

I meant to take the camera along on one of our workdays, but I was always too focussed on the stuff I needed for work. Even at that, I forgot my lunch one day. W and S gave me parts of theirs, and it was the best lunch I had in the whole ten days! Anyway, the only pictures I have are from the immediate vicinity of the ranch house where we stayed. They'll still give you some idea of what it was like.

The work involved a lot of walking, back and forth in a set pattern across a site, while scanning all the vegetation in a 5 m wide swath for rare plants. Sometimes the site was flat open grassland, but sometimes it looked more like this. 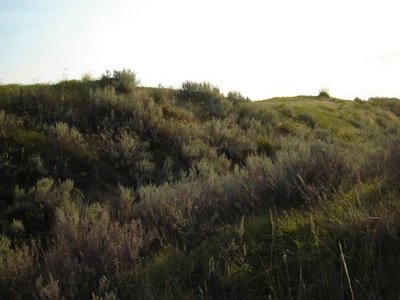 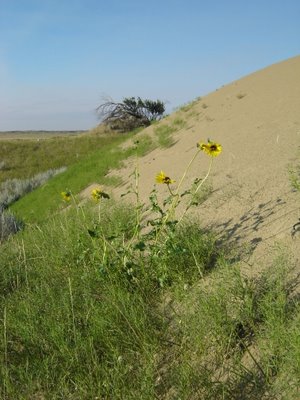 One site I recall had mostly creeping juniper at ground level, plus waist- to shoulder-high wolf willow (silverberry, Elaeagnus commutata) throughout. Then there was a site down in a broad low area where water table supports poplars and water birch - making it very difficult to see our flags to keep on track with the search pattern.

Once, while filling out a site form, W asked for my estimate of the % cover of a speargrass, Stipa comata. I said the estimate varies depending on what the botanist is wearing on their ankles.

I loved it all.

Some views of the dune north of the ranch house: 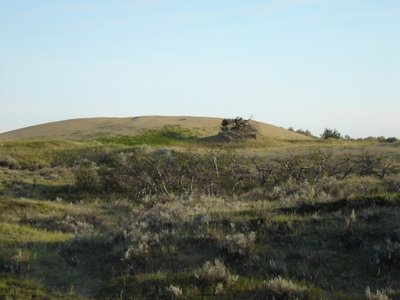 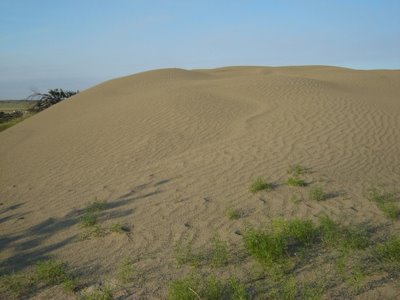 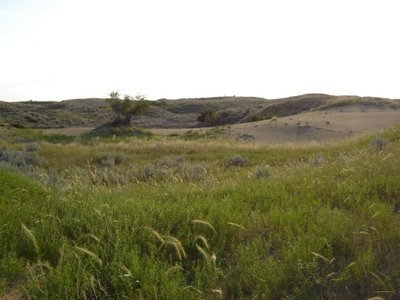 And looking back from the dune toward the ranch house: 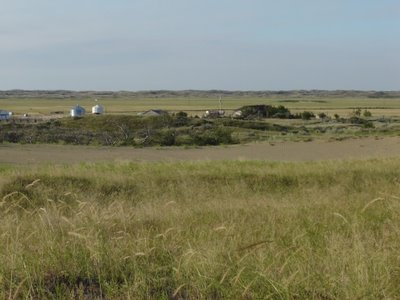 I noticed a lot of terrain like this, where there is a low flat, bordered by higher, very rough land, known as "choppy dune." The ranch buildings seem to huddle at the edge of the flat, taking shelter from the sand ridges but staying out of them. The loneliness of the place was very appealing to me, as long as I didn't start thinking about what it would take to survive there, independently. 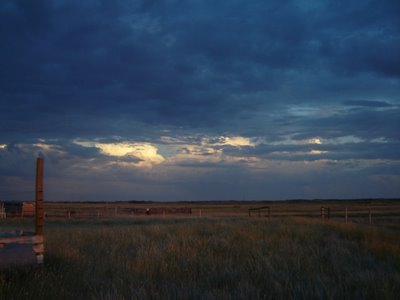 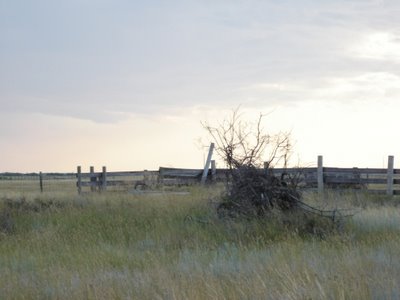 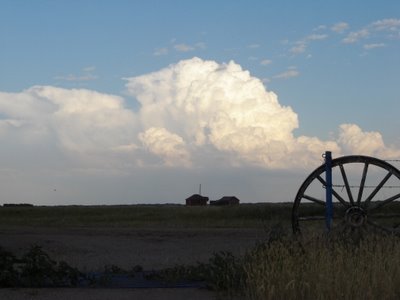 One night I stayed alone at the ranch. At the end of the ten-day shift, some of the team members were finished, and some had a four-day break before returning for another shift. All left for their homes or holidays, except for me. I stayed on to wait for Garth and James to pick me up so we could travel on westward to see Ruth's graduation from her three-week music program at the Air Cadet Summer Training Centre at Penhold, Alberta.

Something woke me - perhaps the wind slamming a bedroom door upstairs. 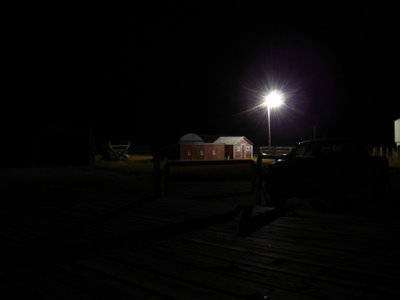 Look away from that yard light, and what do you see? 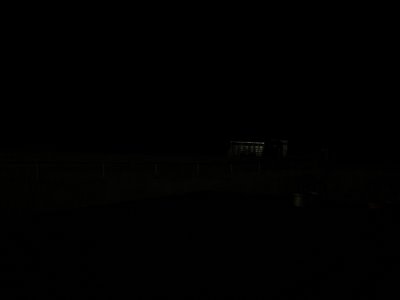 I see a glint on the horse trailers. Nothing more. No distant traffic, or yard lights, or glow from a town - nothing. Just the dark of the sandhill night. 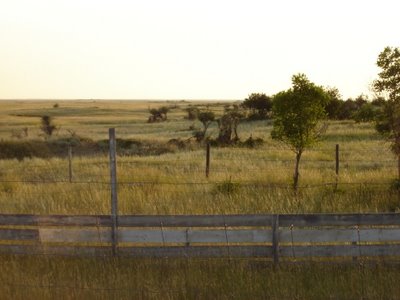 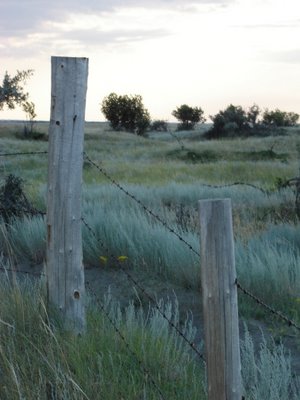 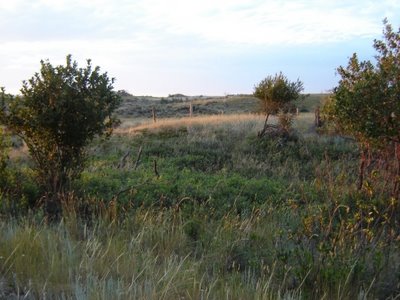 I love the silvery blue/greens in the second to last photo.

So, did you find many of the rare plants you were looking for?

"Many"? Depends on your perspective, I guess. I got to see several species that I had never seen before. Some of these plants occurred quite frequently on our sites. That might seem odd, since they are called "rare," but the sandhills contain unusual habitat for Saskatchewan, and many of our sites were dunes, a particularly unusual habitat. Still, I have a suspicion that a big study like this one might result in some reclassification of plants based on the new information about their abundance.