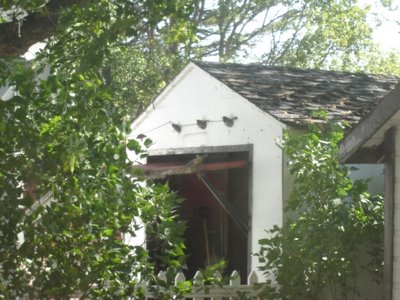 This old garage next door has become more of a toolshed, since there is a newer garage blocking off the driveway in front of it. The door stays up a lot - enough that the neighbourhood feral kittens have come to trust it as part of their playground. 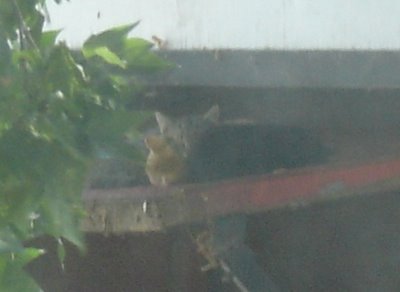 Kitten pile. There are three there - a black one in front and to the right, a grey one behind and to the left (and over), and an orange kitten sandwich filling in the middle. This was just a quick shot out my kitchen window.

I tried to look casual, wandering onto our driveway with the short stepladder, but they're on the alert now. 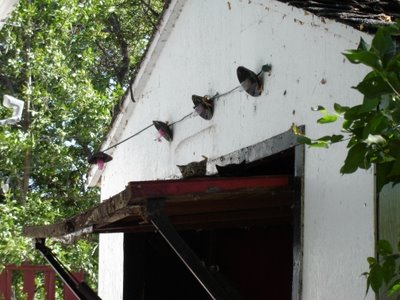 The best I could do before they scurried into the shadows on the upper part of the door: 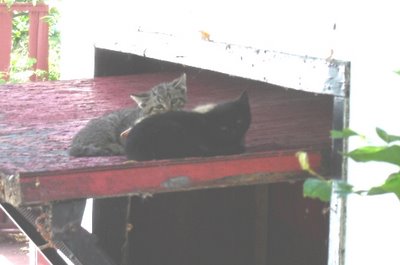 Awww. There are a few others, I think. We've seen a beautiful mostly-white kitten with pale orange patches around the ears and down the tail, playing with the leaves that have begun to rattle around on our driveway since the drought. Reminded us of Marshmallow, the sweetest cat ever (named for being white with lightly-toasted tips), and the kids were ready to send our Pumpkin away if only they could catch the kitten and have "Marshmallow" back. After some sober discussion we agreed that the new Marshmallow might be just as nasty as Pumpkin has been - and besides, he's starting to come around. He absolutely loves having his tummy rubbed... he just doesn't know it yet.

I think this is the mama. Her photo shoot happened earlier this summer, back when she still had her youthful figure. 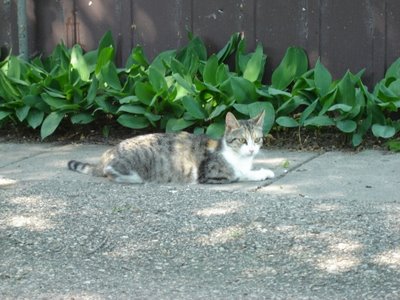 I believe she's the daughter of the one we used to call "mama," a mostly-white calico with colour around the ears and down the tail, and a few small spots of colour on her body. We still see her around occasionally, but this daughter and her young family have taken over most of the use of our yard. This younger mama would be a half-sister (at least) to our Pumpkin. She's been keeping out of view more these days, but in the spring she used to come and check out my work as I dug in the garden. She would lie down in the trench where I had removed some sod, and as long as I didn't get too close or walk directly towards her, she would stay a while and observe. Much tamer than her mother, but still decidedly a wild cat. 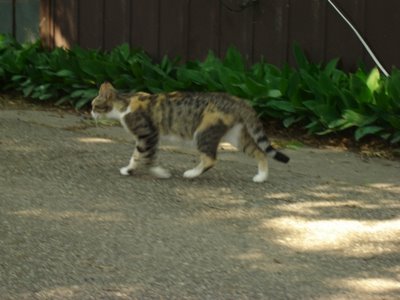 One of these days I might pass along some photos to the Town Office, but if you want me to hold off until you claim and collar one of these cats, let me know.

UPDATE: I saw some more kittens scurrying into the shadows when I walked onto our dark driveway last night (coming home from a church meeting). There is another black one, with some white on the face and paws; and another white-and-pale-orange one, this one with the orange covering much of its head and most of its back. Which reminds me, there is a white-and-dark-grey one with similar colour distribution. That makes seven, doesn't it?

Where do all these litters and litters of kittens go?
Posted by arcolaura at 1:21 p.m.

So, any takers on those kittens yet?

This property we're (in the midst of, still) buying, I suspect it's coming to us with a feral cat population. Which is alright, I suppose, as vermin control, but I'm already dreading how attached my kids will get.

I wouldn't worry too much about attachment. Feral cats actually cure that tendency, in my experience. They start out cute-ish, though usually with runny eyes and nose, and they age rapidly. And they respond to all attention with suspicious glances or a tail disappearing around or under something.

I hope so. Right now my daughter is so obsessed with the neighbour's dog that we had to ban it from conversation.

I'm a little obsessed about it myself, because it's being severely neglected and it's getting neurotic and barking incessantly for hours at a time. (Which is making ME almost psychotic!) They feed it and it has a small run, but they don't walk it, they leave it alone from early in the morning until close to midnight, and it's a 5 month old yellow lab. They give it just enough to avoid a visit from the SPCA. A beautiful dog with a wonderful disposition and very intelligent, but it's an active breed and needs training and attention.

Yesterday it barked so long (they were away from home again, of course) that Chive finally went over and let him out and played with him for a while, which helped the dog's state of mind a bit. Unfortunately, Chive's allergic to dogs, so now he's all weepy and sneezy.

WHY do people want to keep prisoners in their backyards?

Umm - ya got me (shrug). Wish there was a punctuation mark for that rising inflection that isn't really a question.

The dog that we were walking this summer is going by on the street just now, happily jogging in front of his owner's bicycle, while a toddler on a smaller bike tries to keep up. A warm-fuzzy scene of mutual affection. These people provide their dog with an entire backyard to run in, and take him on daily walks, but he's a big dog and we were always a bit uncomfortable wondering if our daily visit was enough company for him, for the entire summer that they were away.

"Where do all these litters and litters of kittens go?"

Coyote fuel would be my guess.