Let the Sun Shine In

There's a new house in Arcola. Remember that vacant lot I wrote about last winter? Well, it's not vacant anymore. 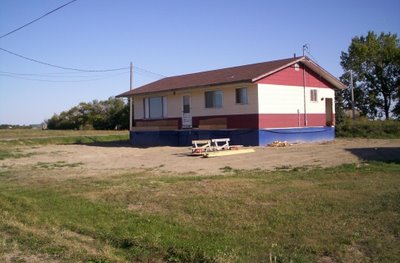 It almost makes me wonder if somebody got worried that I would find some rare plant in there with the native grasses, and so they rushed to develop it. Seriously, folks, I'm not that concerned about rare plants (even though I do accept pay to go look for them sometimes).

I'm much more concerned about greenhouse gas emissions, and here we have a problem. They put this house in backwards! Those big windows are facing north. Not only that, but the two biggest windows are being expanded into even larger window bays.

Now, I'm happy to see an old house salvaged for a few more decades of use. This house was moved in from South Arcola, saving a lot of energy and material that would have been needed to build a new one. But just because it's old doesn't mean you have to live with high energy use. All they had to do was to face those windows south into the yard (which is a better view anyway, with grass and trees instead of a street), and they could have had some good solar gain to cut their winter heating costs.

Maybe they were worried about appearances, having the "front" door facing the back yard. I'd say nobody uses the front door anyway, so why worry about it? If the house were turned around, that side door would be right up close to the front. I think the house would have looked welcoming enough with a little deck at that side, steps down to the front yard, and some foundation plantings to soften the north wall.

But maybe they actually thought about the sun on those windows, and worried that the house would get too hot in summer. Maybe they heard the rumour about another house in Arcola, with a big sunroom, and how hot it gets. 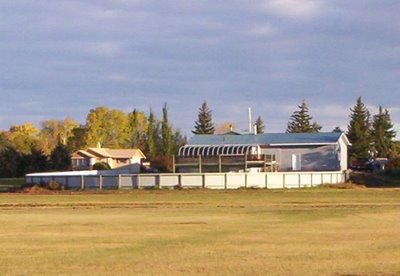 If that house is turning people off passive solar heating, it's a sad thing. At this latitude, it's really very simple to have sun streaming in your windows in winter, and still keep the house shady and cool in summer. The solution is built right into the structure of the house, in the form of a long overhang. Here's how it works: 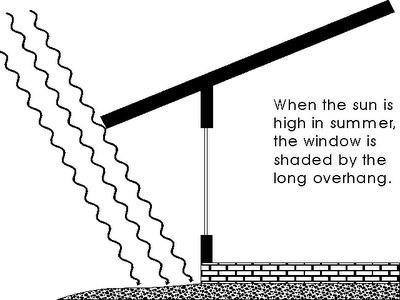 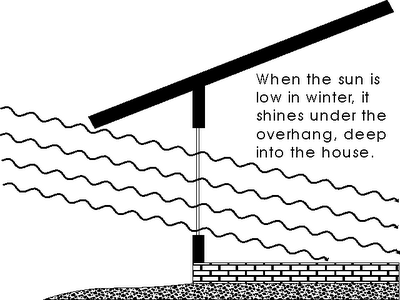 I've seen this work at my parents' house, with windows nearly floor to ceiling. In summer there is just a little strip of sunlight on the floor by the windows, and in winter, the rays fall all the way to the back wall of the room.

But so many houses get built backwards, just to have the picture window facing the front yard. My own house is backwards, and I keep plotting to turn its insides back to front. I have a plan. Now if I could just convince myself that it is a better plan than moving to a farm, I'd get on with it.
Posted by arcolaura at 11:32 a.m.

Laura: Although not directly pertinent, FoodNotLawns dot com might be of interest to you if you've not heard of it.

It's pretty incredible that people continue to orient their picture windows to the North in this climate. You'd think it would be part of building codes or something, given all the money the federal government is throwing at energy-efficiency programs and rebates for upgrades.

Richard - if we stay here, I am sure we will have less and less lawn. I want to put some food-bearing shrubs in the shady spot north of the house (which grows very little grass anyway), and I would probably keep persuading Garth that we should have one more garden bed, and one more, and then I might add a rabbit house or a chicken tractor. He says we need some lawn to play on, but I don't recall seeing anyone play on it this entire summer, and there are lots of athletic fields around town that should be used so we don't lose 'em.

Glad to hear that people are promoting food-bearing yards.

Madcap - yes, you'd think so, except now I hear they've cut those energy efficiency programs for homeowners altogether. Huh? It was the one part of the Liberal response to climate change that actually might have done some good. But I like the building codes idea. Maybe I could talk to the town council here - there's a new subdivision going up on the north side of town...

I am always dismayed to see new houses built, or double wide mobile homes set up with absolutely no regard for passive solar heating and cooling principles. That is why we designed our new house the way we did. Now if we could just get it finished...

I have my house oriented almost due east-west. In the winter on days when the temperature will well below freezing and the sun is shining the heater never comes on. The trim on the house is a light green. I have an infrared thermometer and the temperature of the wood trim is 30 degrees higher than the white wood siding. Orientation, material and color make the difference. With a little work I think I can get about 90% of my heat from the sun. As you've illustrated, it's so easy and simple to do.

We just finished the process to get an energy rebate for the new furnace we put in last year. The guy let us know that this particular program was ending, but he said it looked like there were several more in the works. I guess we'll have to wait and see.

I was looking at new windows yesterday, just to see what's out there. What a difference between the latest thing and the wretched old sliders we've got in this house! I'm looking forward to living in a house where the Merry Little Breezes aren't chasing around indoors all winter long.

Deb - how's that house coming? Sounds like you've been mighty busy with other things, and I know the house my parents built took decades to finish - what am I saying? Finish? Never! They're probably pouring concrete for the latest little extra right now.

IW - that's fascinating about the temperature difference on the trim. Where do you find an infrared thermometer, and what's it cost? I think it would be great to have a few specialized measurement devices like that available through some place like the town office or the lumberyard, for people to rent or borrow.

Madcap - well, there's hope, then. I don't quite know what to make of this government. Some of the cuts look harsh, but then a lot of the previous programs looked like pie-in-the-sky to me, so maybe this is better.

And cheers for the snug house! That's one nice thing about this house - good windows, even if they do face the wrong way!