I know, it's not a hospital anymore, they call it a Health Centre now. But as of yesterday morning, it doesn't even offer emergency services. 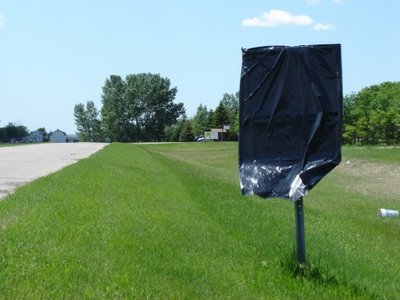 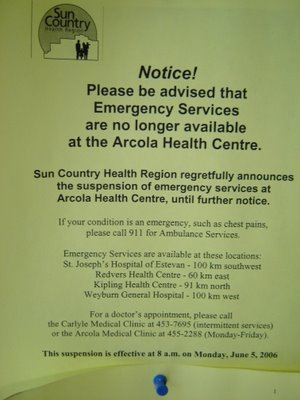 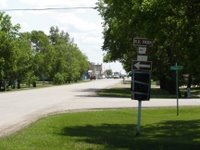 The fine print above says:

If your condition is an emergency, such as chest pains, please call 911 for Ambulance Services.

The Health Centres are closer, but if your condition is that desperate, they'll probably just be stabilizing you and sending you on. If you call the ambulance, chances are it will be an hour before you see the inside of an emergency room.

The press release (which I didn't photograph, because I wrongly assumed that I could find it on the Health District website) says that a doctor who had been recruited to replace the one leaving Arcola/Carlyle was unable to provide documentation of his qualifications.
(UPDATE: the news release is on the website now.)

The situation reminds me of a comment I overheard, about the departure of Carlyle's funeral director: "Well, nobody has died since Darren left . . ." 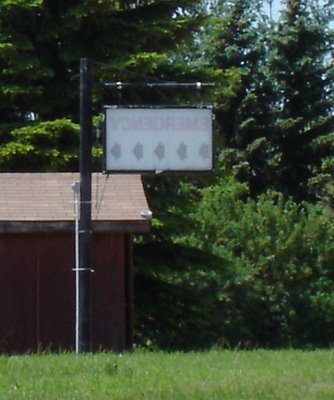 Wow. I "like" the bit where if you have chest pains you're supposed to phone for help rather than going inside and getting staff to phone for you. There is still other staff there right?
Cripes, this isn't the far north. Do we have to start using medivac helicopters for Carnduff and Arcola? With our roads falling apart too, it won't be long until that's the only way to get emergency treatment. If you don't have a portable defibulator on site, kiss your loved one goodbye if there's a 100km trip by ground to make.

a driver without a drivers abstract has a hard time getting a job but a doctor without proof of qualifications can. if i ever get sick i hope im in alberta or the U.S.

That is horrible! I had a panic attack (the first one I've ever had) on the way back from Saskatoon to Calgary about 30km's out of Rosetown, and I was driving.

That was the most terrifying 30km of my life, but thankfully I was able to get to the ER quickly and everything was ok.

I don't know what I would have done if I was 60km away from the nearest Emergency centre.

Wow. I guess you better not have any emergencies...

And what a round trip for the ambulance drivers. I hope too many people don't have problems at the same time, especially if the weather gets bad.

"I'm sorry, they're all out on 200km round trips. Please try back in a couple hours."

Saskboy - Actually, I don't know what they've got posted on the Health Centre doors; that notice was posted downtown.

Ross - easy there, the doctor was recruited, not hired. He failed the final check on his qualifications, so he didn't get the job. That's why we're left without emergency services, while they try to recruit another one.

e4 - they do have ambulance base stations a bit closer (Stoughton is less than half an hour away). Still, I'm thinking I should check if they need any First Responder trainees here.

That's too scary to think about. At least it sounds temporary from your comments.

We have far too many shutting down for good in this country.

It's especially bad for anyone needing ob/gyn services.

I presume that you sent copies of this blog to your MP and to the Prime Minister and . . .

Broken legs and bacterial infections and the like are well treated by allopathic medicine. Not much else.

But then, it has never bothered me to live at least 30 minutes from any health treatment at all, which I do.

I tend to agree, CG. Which means - I would like to see a lot less resources going to highly specialized services (many focussed on stretching out the last few days or weeks of a life) delivered only in large centres, and more going to ensure that basics like bone-setting are available locally.

I'm also quite surprised by the stir this post created. With all the talk about a crisis in health care delivery, wasn't anybody expecting this? I don't think the folks around here are very much surprised.

Well, and in truth, it doesn't sound like your emergency services will be suspended very long. More a recruitment issue. Shades of Northern Exposure (was that the very last TV program I regularly watched?). Recruiting doctors is something Southern Appalachia knows about too.

Anyway, I think the real problem lies more in the way allopathic medicine has made a monopoly for itself. And gotten the government to pay for it.

And at least in this country, there is a problem with how we actually pay people to be unhealthy (fully 1/5, maybe 1/4, of all people are on "disability" -- no joke -- that's the real welfare roll).

And how we don't hold people responsible, in any way, for their own behavior, and many if not most chronic diseases are a result of behavior, of daily choices.

And a whole lot of other things I think too ;->