I hesitate to post this design, because I might just leave it at that. Please encourage me to go ahead and build one.

During the week that we were learning about and building a labyrinth last summer at Calling Lakes Centre, we were also playing some Tai Chi on the same piece of ground. Somehow the two concepts got mixed up in my head.

I remember standing in the Centre's bookstore, leafing through a book about labyrinths, and stopping short at an old engraving of a labyrinth of stone walls, in which the tops of the walls were the walking surface. It was an imaginary scene, meant to represent the perilous journey of pilgrims through life.

The image seized me, because as I looked at it, I saw a way to build a labyrinth based on the Tai Chi symbol. It was a complex plan involving a two-level structure, above and below ground. The path would start on the upper level, following the outline of one swirl of the symbol and then working inward in concentric swirls to reach the central dot, where a ladder or steps would descend to the lower level. The path would then work outward from the central dot to the perimeter of that swirl, and as it traced the 'S' through the centre of the symbol, it would lead into the other swirl. The whole process would repeat in this other half of the symbol, except that it would be starting on the lower level and the central dot would take the walker back up to the upper level. Then the path would work its way out and exit the labyrinth.

I started sketching, and the design went through several simplifications.

First, instead of two levels, there were just some low walls, perhaps 20 cm high. Walkers would start out walking on top of the walls, then go down a step or two at the first dot and walk between the walls to travel back out of that half of the symbol and into the second half, where the dot would return them to the wall tops for the journey out.

I simplified it again, by replacing the low walls with some sort of pavement surface, and grass between, so that walkers travelled first on the pavement and then on the grass, and finally on pavement again.

I don't know why it never occurred to me that the design could be done with a single path, instead of two levels or walking surfaces. All that was needed was to outline all the boundaries between one walking surface and another, and then the spaces between the outlines would be the path. I guess I couldn't get my head around what would happen at the margins and the dots. The solution came to me after I saw the Baltic variation of the classical labyrinth, which has a little S-turn at the centre and a second path travelling out between the circuits of the first.

This made the idea much more practical to build. It bothered me a little that the black-and-white distinction between the two halves of the symbol would be lost, but I pressed on, intending to deal with that problem later.

Even after I sensed that the design would work, I fumbled around for some time trying to actually draw it. I finally got it when I started constructing a Tai Chi symbol in CorelDraw, using three circles as I had seen in a diagram somewhere. I began playing with sets of concentric circles, and gradually figured out that I could construct all the arcs I needed for the entire design from just three sets of circles: one working inward from the border of the design, and two working outward from the dots. As I worked, I made the border-circle set a different color to help keep things straight. Once I started connecting the arcs, though, new arcs took on the color of the border arcs, and this color started flowing inward through the design. There was a thrilling moment when I realized that the path borders were actually just two lines, and if each line was a different color, the underlying pattern of the symbol would be appear. 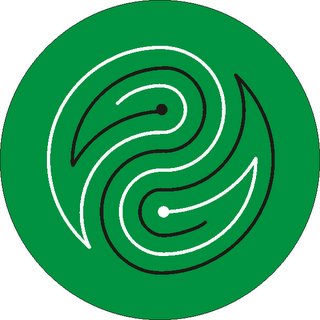 I think I will outline the paths with rocks, either painted black and white, or simply chosen for their dark and light colours. Here is the same design with some perspective added to give an idea of how it might look as you approach it from the south: 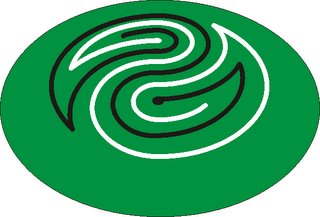 If you want to take the design and build one, please go ahead. You might want to read a bit about the influence of location and compass orientation and so on, or find someone with some Feng Shui or dowsing experience to help choose the spot. I'd love to hear how it turns out.
Posted by arcolaura at 3:52 p.m.

This is really a GREAT idea. You could build it and then host ecumenical conferences!

Thanks, MCM. Ecumenical - that's interesting, I hadn't thought of it that way. I might have to build some conference facilities, too. ;) Sometimes I daydream about building a hotel or hostel next to the Prairie Place Complex, designed for energy efficiency and water conservation. Then again, Garth wants to build a retreat centre up in the hills. So we dream on...

Oh! You mean build it at PCTC! I'm a little slow sometimes. Not sure it would fit their space and mandate, and I'd want to see what the response is from someone more familiar with Taoist philosophy before suggesting it, but yes, that's a good idea too.