Yesterday at Coffee and Scriptures (10:00 a.m. Wednesdays at the United Church, downstairs, everyone welcome...) the question was asked: "Do you think bigotry is getting worse?"

I responded with a lot of my personal frustration about discussion getting shut down by the divide between "right" and "left." I don't know if it's getting worse, or if I'm just new to the whole arena, but it seems to me that a lot of viewpoints (on all sorts of subjects) get either claimed by or rejected by each side, and then anyone speaking up with a viewpoint gets cheered or dismissed simply on the basis of which side "owns" that viewpoint. It's as if you choose once whether to be "right" or "left," and then your side tells you how to think.

Today at small dead animals I read Kate's opinion and a lot of commentary about how the right sees the left. I churned for a while but did not comment. I would have to write a book to reply, and first I would have to learn a lot more history, and by the end of that, I don't know what my opinion would be.

I suspect that many people would percieve me as "left of center," simply because I speak up about environmental issues. And yet, left-wing politics baffle me. I survived Political Science 100 at the University of Regina (a required class for pre-journalism students) by finding familiar-looking words in the exam questions and regurgitating similar-sounding paragraphs that I had memorized out of my notes. (The frightening thing is that I got 70% without having a clue what I was talking about.) I tried to support the New Green Alliance Party for a while, but the most active members seemed to be far more concerned about minimum wage than they were about conservation.

A while ago I commented on the Gristmill Blog: "...where I live, 'Eat less beef' should be changed to 'Eat more beef, as long as it's range-fed.'" Another reader said, "Wrong, LauraH. Bring back the bison and wildfires, get rid of the cattle." I asked how far that reader wanted to take that reasoning - get rid of the people, maybe? A third reader jumped in and suggested that I should be more open to compromise; bison would be a good idea. He went on to say: "Bring natural spiritual energy into the lives of those you meet, even if you only meet them on the world wide web."

I still think "bring back the bison" is simplistic, but I was mollified. I wanted to learn more about this seemingly gentle, wise reader, so I visited his blog. To my shock, I found it laden with mocking names for the U.S. President. How is that "natural spiritual energy"?

All I can say is this: I believe it is up to us as individuals to refuse to be boxed up in political ideologies. It is also up to us to insist on seeing one another as people, not as members of this or that group. Maybe in politics we need parties with clearly packaged positions, but in day-to-day life, as individuals, we need to counteract the magnetic force of those political positions, through our personal determination to think for ourselves. For myself I would add that if I am going to be absolutist about anything, I will be absolutist about allegiance to God. But that's just for myself. 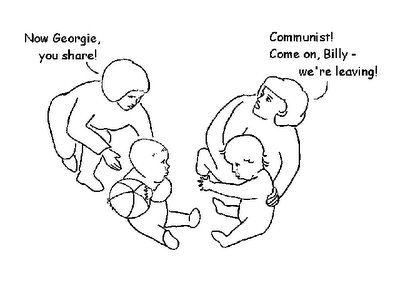 I went and had a peek at that conversation you were referring to. I can see the value in being thoughtful about population, but honestly, anihilation? I thought you were (and always are, of course) very sensible.