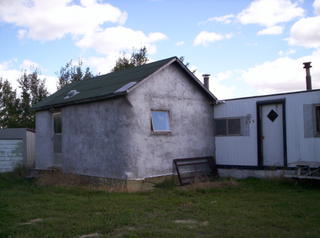 Dan Trabue asked me for a picture of the strawbale addition that we built onto our house trailer, back when we were living on the farm with Mom and Dad.

It's a post-and-beam structure with strawbales filling in between the posts, and cement plaster covering the bales inside and out. The six posts (hidden in the walls) are salvaged power poles, painted to minimize fumes from the creosote. We built a floor deck between the posts, and a frame around the top to support the roof, which we simply moved from an existing garage. Then we filled in the spaces between the posts with strawbales, building directly on top of the floor deck (with a layer of plaster spread on the deck first to seal the bottom of the bales). Stucco wire and two coats of cement plaster completed the walls. We continued the plaster up over the existing plywood in the gables.

The plaster can be finished smooth so that the house looks quite conventional, but I favoured a rough finish for a more rustic look, and Garth went along with it.

We experimented with some of the details, such as how to shape the outside corners. The near corner in the photo is rounded (with some funny shaping at the top and bottom to meet the square corners of the floor deck and roof).

The space is roughly 10' x 13', and we divided it to make a bedroom and an entrance hall with a bit of storage.

We stopped by and got some pictures yesterday, picked up some videos that we had forgotten to take down off a "shelf" (the top of a doorframe in an unfinished wall), and looked around a bit wistfully. The building hasn't had much use in the last year, so please excuse the cobwebs on the windowsill.

We had various reasons for moving out: the convenience and fuel savings of living in town; the various leaks in the house trailer roof; the widening breezy gap where the house trailer was shifting away from the addition; and finally, the furnace rusting out.

In hindsight, there are just three major things we would do differently. We would build the roof to extend all the way across above the existing trailer roof, to avoid leaks at the join. What we did was put an eavestrough along the join between the two roofs, sort of inside the house, but it was almost impossible to get it to catch under the edges of both roofs, and we often had water running down the wall between the trailer and the addition. We would also put more substantial, solid supports under the trailer to keep it from twisting away from the addition. And finally, we would start with a trailer that was in better shape. We're hoping to sell the trailer this fall and keep the addition, adding a sunroom onto it to make a nice little strawbale cottage.