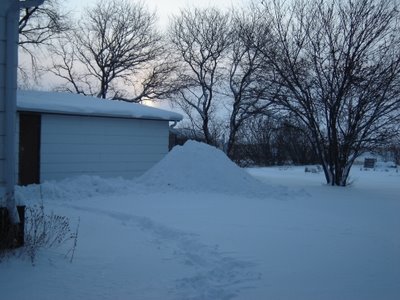 This is more like it! Our first lasting snow of the season came last Thursday evening, and the big storm blew in yesterday. Here's the snow pile from a better angle to compare to last year's photo from the beginning of March. 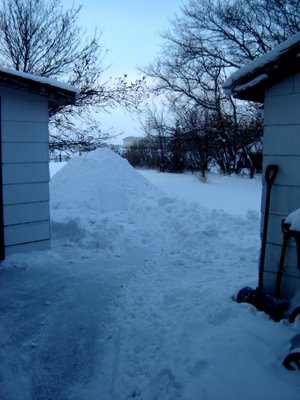 This pile is bigger already. I was out before daylight topping it up with the new snowdrifts from overnight, to keep Garth from shovelling and re-injuring his elbow. It's been puffed up and glowing red a couple of times in the last few days, but it improves with rest and a castor oil pack. He thinks he hurt it in a curling game, sweeping.

Just as I was pushing the last ridges out of the way so he could back the car out, his colleague phoned to say he was stuck, in a back alley near Coteau and Mountain. I put the shovel in the car and jumped in.

We saw a vehicle churning its way slowly out of the south end of that alley, but when we got around to the north end we found two big drifts between the street and the snowed-in car. I started in with the shovel while the men discussed the situation. They decided the car could stay where it was; Garth would give him a ride for today.

With all the computer gear and two big men, the Geo was looking a bit crowded, so I put the shovel on my shoulder and walked home.

Looks like B had no trouble getting out to the cleared street and away to work. 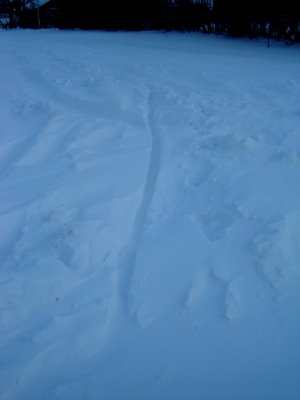 We need some of that here, lots of it!

Is it brown and dry on your mountain, Jim?

Once the sun got up, it was dazzling. I'm loving it. A real winter again! And I notice that a lot of people seem jolly, almost excited. Just the moisture? A reprieve from vague fears?

Or maybe the prospect of good skiing?

Because most of the trees here are non-deciduous evergreens it is still very green, and the contrast with the deep blue sky is always beautiful.

But the earth is very dry and we're a couple of inches below normal in our precipitation.

It's finally gotten cold though, a high of 21F yesterday, and we could get our first real snow anytime now.

I loved snow as a kid; now I prefer looking at it in your beautiful pictures.

Your new name is neat. I didn't have any problems because you're the only arcol-o-gist on my blogroll. I think you may even be the only Laura.

Thanks Ann. I've been noticing the snow a lot - the way it blows away until only sculpted footprints are left on the bare pavement; the stories told in tiny cat footprints or a row of cat body-prints where the creature went lunging through the deep stuff. If I could keep a camera and my fingers warm, I might take a lot more pictures.