Some hills tend to cradle you.

These hills lift me to the sky. 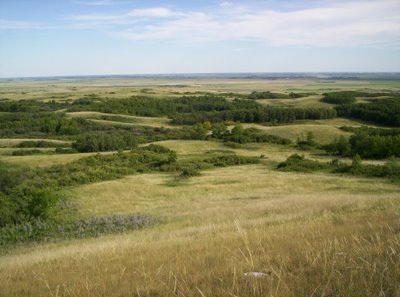 I took this view for granted.

All those years growing up on my parents' farm, I could walk out to this hill just across from the house, just about any time I wanted. Almost looks like an aerial photo, doesn't it? But when I took this picture the other day, I was sitting on a rock. A small one. With my feet on the ground.

We kids used to go out to "the South Slopes," as we called this spot, in late winter when the sun was getting stronger and starting to melt the snow off a few small patches near the peaks of the biggest hills. I still remember the thrill of standing on that bare brown grass and earth, reconnecting with the ground for the first time in months.

We'd come out here to look for the first crocus buds, too.

When I walked out onto this hilltop a few years ago, when we had just moved back to the farm after fifteen years in the city, I was struck with a sudden realization. This view shaped the person that I am.

The other day, with my camera, I tried to capture a sense of the place, but it was quite beyond me. Perhaps if I'd had enough digital memory left for a video, I could have given you a glimmer of it. As it was, I got stingy with the pictures and didn't even zoom in on Arcola, so all you get is a blow-up of part of the scene above. This is my childhood view of the town where I now live. 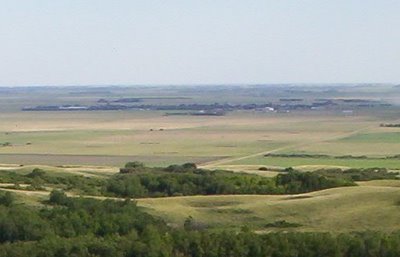 It's just that band of dark green with some buildings showing in it, stretching across most of the width of this view of the distant "flats." I sometimes worry if I'll offend someone by saying "the flats," but our Arcola-Kisbey history book is subtitled "Mountain Hills to Prairie Flats," so I guess it's okay.

Arcola is about half a mile wide, I'd say. The road you can see in the middle distance is running from north to south away from the hills, and the next north-south road, one mile east of it, runs past the left end of the dark green area.

To give you a sense of how steep this hill is, here is another picture looking across its slope from a bit further east. You can tell by the horizon line on the flats - I didn't tilt the camera. (Okay, maybe a teeny bit. It's hard to stand up straight on that slope.) 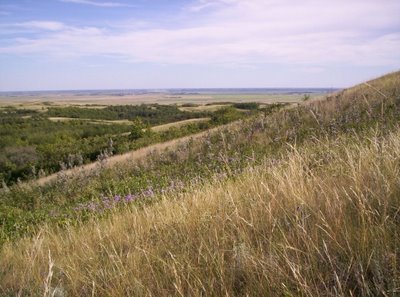 And if you're thinking that's not steep, try climbing it. Or try browsing through some pictures of foothills. Most of the steeper slopes that you see are supported by rock formations. This is just glacial till. Here is a view of the "South Slopes" from the meadow below, looking west across their face. 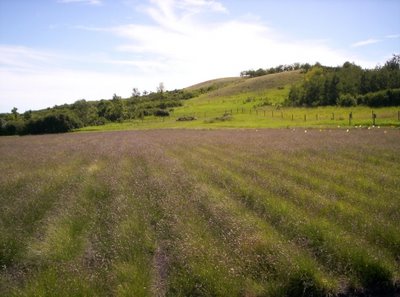 If geology and ecology and botany bore you, skip along to some more pictures below.

I've been told that the Moose Mountains are a dead-ice moraine. When the last continental ice sheet was retreating, a chunk of the ice sat here and melted, dropping all the clay, sand, gravel, and boulders it contained in a great hummocky heap. If I recall correctly, the hollows are places where pieces of ice remained longer, so the earth materials settled around the edges of these lingering ice blocks, forming hills, and when the ice blocks finally melted out, they left holes that softened into hollows. All along the foot of the hills there are sand and gravel deposits, where streams running out of the melting ice slowed down as they entered the glacial lake to the south. The sand settled out of the water as it slowed. The silts and clays took much longer to settle out, so they were more-or-less evenly distributed across the lake bed, forming the flats.

But we're still up in the hills, cradled in a meadow. I'll tell you a little bit about it. The crop in the foreground above is blue grama grass, a native species of short- and mixed-grass prairie, found most abundantly in dry upland areas. (Mom and Dad grow it for seed, for prairie reclamation projects.) This meadow was once a tame hayfield of yellow sweet-clover and smooth brome grass. Smooth brome was widely seeded as a hay crop and as a stabilizer for road ditches, and has taken over most of the "edge" area between grassland and wooded areas in our parklands. Any natural "edge" area - or "ecotone" as the biologists call it - is very important habitat to many wildlife species. My dad remarked that we probably don't know what "edge" used to be like here; brome grass has changed it, everywhere. In the photo above, you can see the extent of the brome grass, as the bright green area beyond the blue grama field, reaching to the edges of the trees and well up the slope of the hill.

Ah, but it's a part of who we are. I have a song about that, called "The Whispers in the Brome." Maybe some other day. I still have lots more pictures. Here's another view in the meadow. 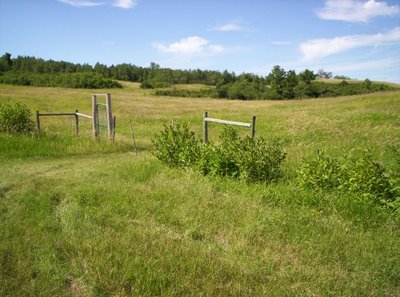 And on the other side of the meadow, south of those "South Slopes," we have "The Big Woods." 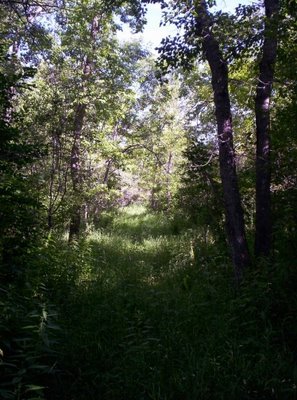 It's not the deepest, darkest view I could get, that's for sure. I love to thread my way through the bush and peer through beneath the understory for tiny flowers and mushrooms and such, but when it comes to taking pictures, I'm always drawn to the light. Besides, I was in the perpetual hurry that seems to haunt me these days, so I mostly kept to the not-so-natural trails. 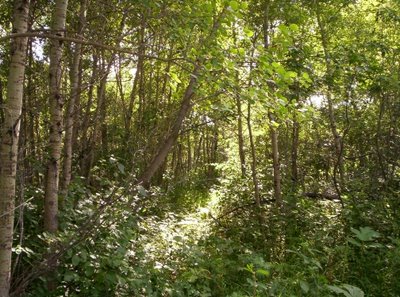 The cattle had just been put into this pasture the day I rambled through it, so they hadn't grazed and trampled out the trails yet. Give them a few days. Then you can breeze through without having to dodge the stinging nettles, and maybe come away with only a couple of woodticks.

The "Big Woods" are a bit unusual in this landscape. They cover a broad low area that probably has water table fairly close to the surface, supporting black poplar (or balsam poplar, Populus balsamifera) and willows. Usually these species are found in smaller areas along the margins of sloughs and the bottoms of ravines. 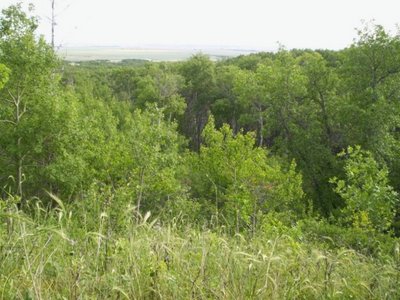 This is a view from the upper slope of a ravine at the west end of the "South Slopes." I didn't go down to the bottom. You can see a little bit into the shadows, but we're looking mostly at the crowns of the trees. The ravines are a different world. If it's hard work climbing the South Slopes, it's an ordeal climbing straight up through the tangle of thick underbrush on the side of one of these ravines. I've only done it a few times. Usually I seek out a good path before I start up. There is always a path along the bottom, where the cattle and deer and elk and moose follow the way of least resistance. There is good grazing and browsing there, too, even when the hills are dry, and in some of the deeper places there are springs. 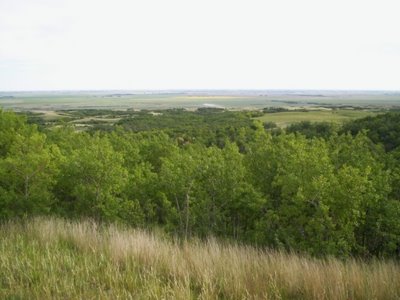 Back up at the top of that slope, looking southwest, you can see the ravine running away through the center of the photo towards the flats. In the middle distance at the right side of the photo, you can see an area of more uniform grass cover. Again, it's an old field, now in tame pasture. Notice the contrast with the more diverse vegetation east of the ravine.

Time to turn for home. I did use a deceptive camera angle for this shot, getting down on elbows and knees to look through the needle-and-thread grass (Stipa comata) among the harebells (Campanula rotundifolia). 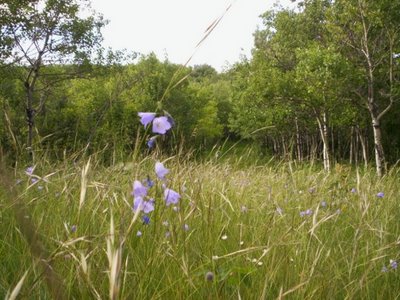 Labels: ecology, hills, pictures, the farm, through my eyes

Yes, beautiful. But those are hills?

Reminds me of the story of the Scotsman visiting his cousin in Canada. They were walking in the woods by a lake when a huge creature crashed through the bushes and plunged into the lake.

Many of the big farms along the foot of the hills were established by people from Scotland. We figure they were wandering slightly dazed across the plains, and finally came upon a place that looked a wee bit like hame. There is a lady in town who came from Scotland, and at the Robert Burns dinner last winter, we sang "These Are My Mountains" for her.

I was wondering, how far is Arcola from your home farm?

There is a view, and I may have a fresh photo of it on the computer, that I love and yet a photo NEVER captures it to my satisfaction. It is the view that tells me that I live in heaven. So I think I understand your view.

About the grasses, it is a shame sometimes but then again, it is, and what thrives now thrives now and reaches a new balance and truthfully this is how it always is and always was too.

About five miles. I bike it occasionally, but that first half-mile climb into the hills, I've always had to walk the bike, except one time when a farmer gave me a ride to the foot of it, so I was starting fresh.

Hey, I think I saw you on Google Earth pushing that bike up that little hill. It's hard to be sure though because that part of Canada isn't in very high resolution photography.