Everything I'd read about conserving energy at home told me I had to replace the 1970s refrigerator. Garth told me it was all a scam to sell more refrigerators. He insisted that the power we'd save would not make up for the resources used in making and transporting a new refrigerator.

I pulled out my EnergyCheck printouts, but they were highly suspect. According to their figures, the potential energy savings around our place exceeded our total energy usage.

Then I pulled out our actual power bills and listed a full year of monthly power costs. Garth started calculating out loud how much of that power probably went to the computer to support my blogging habit, and then...

the wind went out of his sails. He came up with only a fraction of the power use. It had to be going somewhere. "Okay," he said, "you've convinced me."

His brother came down to help him work on vehicles, and I seized the opportunity to get some heavy lifting done. I drove to Carlyle, bought the new refrigerator, helped the two Sears ladies load it (it's a small one, rather light), tied it securely into the truck box (I am sinfully proud of my skill with a few good knots), and brought it home for the men to haul inside. They were desperately trying to finish a repair to the car before Garth had to drive off (in said car) to a weekend event. He was already late when they finished, but they moved the refrigerator in, took the old one out to the garage, and left.

I got busy with the operating manual, carefully wiping out the interior as instructed, although hurrying because of all the food getting warm on the kitchen table. At last I was ready. I plugged it in - and yanked the plug out again.

Hesitantly, I plugged it in again. Again that spluttering hiss, and I unplugged it quickly.

I walked around it, looking at the coils and compressor for obvious problems. I looked at the warming food. I plugged it in once more. This time I endured the hissing long enough to circle around to where I could see the coils.

My expletives brought curious children onto the scene, as I scrambled to unplug it for good. I could actually see a mist of refrigerant leaking out of a join between the compressor and the coils. What is that stuff? Didn't I read somewhere that the new refrigerants are less damaging to the ozone layer, but not completely harmless? Do I want that stuff in my kitchen? How am I going to solve this mess and get cleaned up and get over to the fowl supper and eat before I'm supposed to be scraping plates at seven?

A couple of phone calls got me an assurance from the Sears ladies that I could exchange the refrigerator the next day, as well as a lecture from a refrigeration technician about worrying about "that stuff you've been fed." I went ahead and worried anyway. There was no answer at Mom and Dad's.

Meanwhile Ruth was building up to a rant about how I wasn't helping her get fed and ready to go to a birthday party. She made some comment along the lines of "Why can't I just have an ordinary life?" and I exploded. She seemed to be suggesting that I actually liked having everything go wrong. She wanted to carry on with her social life as if nothing had happened, and furthermore, she wanted me to help her do that, but she wouldn't consider helping me deal with my refrigerator crisis. But after some shrilling and sobbing on my part, she quietly helped James and me carry all the food out to the old refrigerator in the garage. I took the kids over to the fowl supper, and Ruth paid for both their meals because I didn't have any cash. I walked right in without paying, in my grubby clothes, looking for my Dad. Finally I spotted Mom cutting pies, and she pointed me to Dad's table. In talking with him, I decided that I could probably find out what substance I was dealing with from the manual, and find out its properties from the Internet. I left the kids to fend for themselves at the supper. Ruth was going on from there to the birthday party.

The MSDS for HFC-134a eased my worries somewhat. I opened windows, turned up the thermostat to run the forced air briefly, and then closed off the kitchen and left its window open. I changed into decent clothes, biked downtown for cash and then back to the fowl supper, gulped down turkey dinner in fifteen minutes (no pie for me) and reported for plate scraping duty. When I got home, Ruth was still out at the party. I phoned over to find out when she would be getting home - 10:30 or eleven was the reply. I waited up.

At 2 a.m. I finally put together a vague recollection of Ruth saying something about a sleepover, with the obvious fact that she was not home yet, and realized that 10:30 meant: in the morning.

James wakes early, so I woke early, and set to work preparing to take the refrigerator back. Dad had said he would help move it, but he was out somewhere. I found that I could roll it along a smooth floor by myself, so I moved it out near the front door. Then I rewired the electrical outlet for it, because the old refrigerator hadn't needed a grounding outlet. I was pleasantly surprised to find that the cable supplying the box did have a ground, so I didn't have to fish any wire, just put in a new receptacle. Mom and Dad arrived, and we got the refrigerator back into the truck and tried to replace the packing materials around it to the way they were before. I was tying it down, making some self-congratulatory remark about my trusty knots, when Dad pointed out that my two-way tie-down wouldn't keep the refrigerator from tipping forward over my toolbox. I guess I was lucky on the first trip. We made it a three-way tiedown, and off I went.

At Carlyle, I helped the two Sears ladies unload the damaged refrigerator and load another one. When I got back home, I phoned Dad but Mom told me he was now out mowing ski trails. To be ready for his assistance, I backed the truck up to the step, working it into just the right angle for the maximum overlap of the tailgate onto the step. With all the back-and-forth manoeuvering to get the angle, I developed a pretty good sense of where the step was. I knew I was close but stopped backing and got out to check how much room I had left. 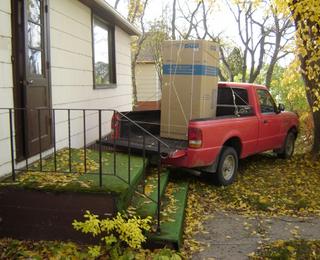 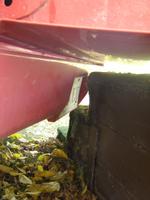 I untied all my trusty knots and slid the refrigerator onto the tailgate. It was only a couple of inches of drop onto the step; surely I could manage it. I did.

I took the packing materials off, except for the foam slab underneath, and pivoted the refrigerator into place directly in front of the door. It was just a couple of inches up to get over the sill.

She came and looked at the situation and confidently agreed. James came to help. We got one refrigerator foot hooked over the door sill, and there it stuck. Ruth kept trying to get me out of the way so she could lift. I kept trying to figure out what was holding it. Ruth tried to push it "that way" without looking at where I was pointing. Finally we got it slid along the door sill enough that it could tilt in the necessary direction, the second foot cleared the sill, and we were away. Ruth phoned Mom and told her, "We got it moved in, so Grampa doesn't have to come."

We rolled it into the kitchen, and I repeated the wiping-out ritual, and tried plugging it in.

Just a sweet hum from the compressor, nothing more.

It was time to put the food in, but I hesitated. The door should be reversed, and if I loaded all the food in now, we might just never get around to changing the door. The manual said I should have a helper, because the refrigerator would have to be tilted.

Just a few hours afterward, I found myself thinking about my upcoming time without Garth around to help me, and feeling a bit daunted. Then I thought about the refrigerator saga.

It's okay, I thought.

I'll say! I'm very impressed with your general know-how. And your photo is SO Canadian Prairies, looks just like something from our area.

I want you on my commune!