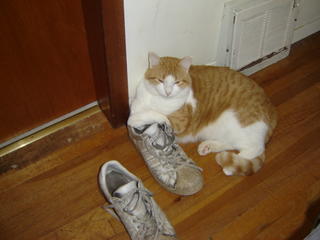 I miss him too, but not that much.

He phoned this morning (which is this evening, over there) and it was so wonderful just to hear his voice, until the little gaps in the sound got bigger and bigger and it was more frustrating than wonderful and then it was cut off altogether. He phoned many times, actually, playing with different settings of the antenna etc. ("voice over internet" at his end of the call). At one point I held the receiver down for Pumpkin (the cat), and he sniffed intently at the speaker end of it.

Then we tried the internet phone at both ends, and things got really weird. I was hearing only blips of his voice, and he started typing chat messages at me, and I got confused about whether to talk or type ("TALK, don't type," he typed). At one point it was almost working, so that he could type at me and I could talk ("you get to talk and i just listen," he said--gotta like that!) but then the voice connection was lost. We settled on typing chat for a while, and that was just too much fun. An online romance with my own hubby. We finally managed to say goodnight, and actually quit typing, and then it got bizarre. The phone kept ringing, and I kept answering and hearing garbled bits. Finally I heard his voice, evidently murmuring as he typed, saying something that had come through on the chat at least five minutes before. Back to the chat I went, and he explained that voice has lowest priority, so it didn't get through till the typing slowed down. Also the packets may have been routed through Japan instead of Pakistan, or something like that.

All in all, it was a whirlwind introduction to the technology of tomorrow and fifteen years ago, all at once.

Goodnight once more, sweetheart.
Posted by arcolaura at 11:44 a.m.

What a strange process of communication. It must be a lonely feeling to have the house "empty". Looking forward to hearing about his adventures.