To see the wind

When you turn off the highway by the Co-op, if you look to the right, this is what you will see. 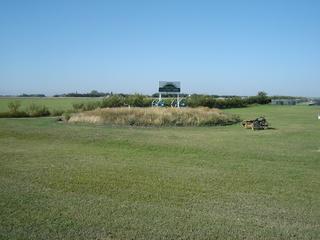 (Well, my bike might not be leaned against the picnic table.)
And if you walk over for a closer look: 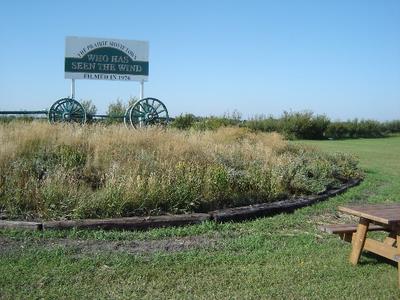 The sign commemorates the filming of "Who Has Seen the Wind" in Arcola in 1976. Helping to establish the little patch of prairie surrounding it has been one of my main hobbies for the last few summers. Yet today was the first time I tried to photograph it.

As I tried different angles and distances, I wondered why it was so difficult to capture the appeal of these native grasses and wildflowers. Finally I realized that it was beyond difficult. When you stand outside and watch the living scene, you see something that cannot be captured: you see the wind. 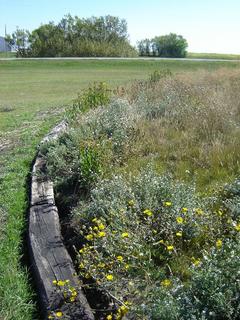 Nora Stewart (my mom) donated the wildflower seedlings. She and Don (my dad) put in a lot of work on the planting and early tending, with help from the Arcola Girl Guides. By the second summer, though, enthusiasm was waning and there was a lot of weeding to do. I could tell the wildflowers from the weeds, so I joined the campaign against the kochia. Often I worked alone, but I could tell that Mom and Dad were still at it, by the way the weed patches shrank between my visits. Garth, Ruth, and James sometimes joined me, and a couple of times we had help from Edgar and Anita Thornton and Russell McMillan. My lone hours of weeding seemed insignificant when I saw the progress we made with a big crew.

In hindsight, Mom says she should have asked that the site be prepared without topsoil. We know, from experience with a small project to revegetate a road cut, that these tough native plants will grow on bare clay. Topsoil is a nice bonus for them, except that in this case, it meant a huge seedbank of kochia. There were times when it seemed to carpet the entire plot. We kept at it though, and by the third summer (last year), the wildflowers were well established. Then Mom and Dad broadcast seed of several native grasses over the plot. Conditions were excellent, and the grass came up thick. Now the kochia had some real competition. 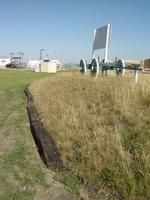 As you can see, our little prairie now gives excellent ground cover, and annual weeds have been a much smaller problem this year. The challenge now is to keep out the quack grass that is spreading up from the surrounding ground. The town purchased railway ties for a grass barrier, and their grader operator Alan Noble did a very neat job of cutting a notch for the ties to sit in. Garth's friend Dan from B&D Meats gave a hand putting the ties in place. Garth and I have been digging away at the quack grass that was already inside the barrier, knowing we weren't getting it all but hoping anyway. Today I see that it's time to start back over the same ground.

I'm making it sound like a lot of work, and it can be, to get the plants you want established. On the other hand, if the weeds had been controlled beforehand, the work would have been much less. The plants themselves have needed very little attention; the wildflowers were watered only in their first summer, and the grass was never watered at all. 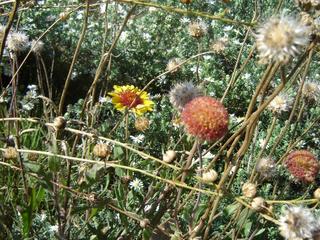 Through the summer this plot has displayed bright spots of colour from the smooth blue beard-tongue, waves of delicate sky blue each morning when the wild blue flax was in bloom, and a blaze of gaillardia. 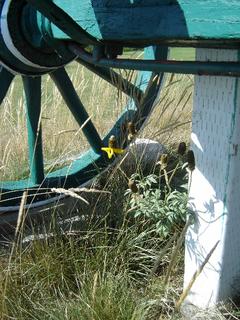 Those who walked over for a close look were rewarded with crocuses, harebells, showy locoweed, and rich velvety brown coneflowers. It's getting late in the season now, but I found a few summer bloomers still hanging on: the last gaillardia (above), and the last coneflower, sheltered from the hot sun by the wagon wheel.

Of course, the spiny ironplant is still going strong, and a single dotted blazingstar still showed some purple. 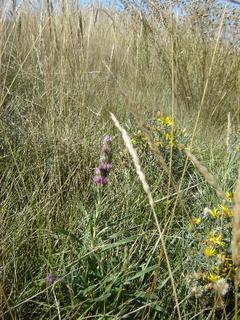 But with summer winding down, the show is left mainly to the asters and the goldenrods. 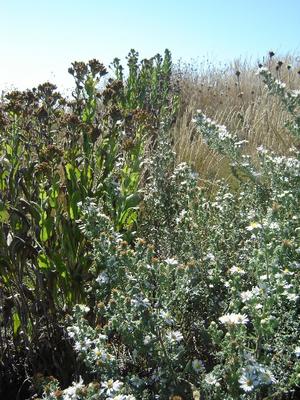 That's a fabulous project, and a hell of a lot of work. One of my favourite books, too.

I've been thinking perhaps a sign which says "these are plants native to Sask not just weeds" would be a good idea. The vast majority of people viewing the sign call your tended plants "weeds" and wonder why Arcola does'nt clean it up

It's not the usual lawn and petunias that people expect, so I guess it's not surprising if some assume that it's weeds. I have been thinking of making a sign with drawings of the different plants, so people can identify them. The trouble with any sign, though, is the size. If it's big enough for people to notice it from the road, it will draw attention away from the welcoming signs that we really want them to notice.