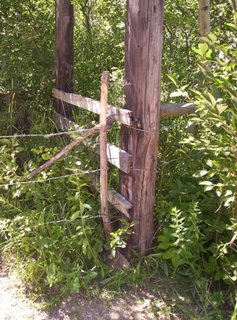 The closing part is the most important. Never open a gate that's meant to stay closed, unless you're sure you'll be able to close it again. It's like knowing how to stop a car before you try starting it.

Some people say "Always close gates," but I say, always leave gates the way you found them. Even if you come upon a gate lying open, and you can see the cattle coming, don't be too sure there aren't some herders behind those cattle, who would be more than a little annoyed if they finally got the herd up to the opening and found that it wasn't.

On the other hand, even if you can see the whole pasture and there is no livestock in sight, don't be too sure it would be okay to leave the gate open. Just picture the above-mentioned herd moving along the roadside ditch, heading for the home farm, only to come upon your left-open gate and turn aside into the wrong pasture.

If it was open, leave it. If it was closed, close it.

Unfortunately, there are several factors that may make a gate harder to close than it was to open.

One is fatigue. If it's all you can do to slip that wire loop off the gate upright, your exhausted arms will have nothing left for working it back on. 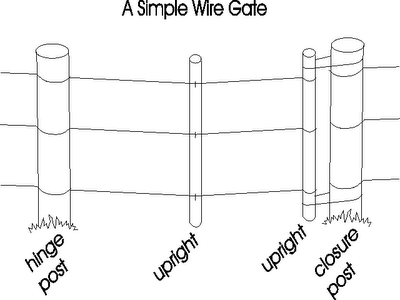 Another factor is the tendency of wire gates to tangle themselves up the moment their tension is released. Then when you try to close the gate, it can seem suddenly several inches shorter than the opening it formerly filled, due to wires being hooked on their neighbours' barbs, uprights being angled out of position, and so on. I have a habit of keeping a firm hold on that gate post as the loop comes off, and then, as I swing the gate open, walking with an outward lean and hanging my weight against the pull of the gate, much like a dog straining at a leash. This keeps the gate straight and upright with no risk of tangling. Of course, if I'm alone, I have to lay the gate down to move my vehicle through the opening, but this can be done carefully and neatly to minimize sagging and tangling of wires.

Once you have the gate back in position, be sure that all the uprights are standing more-or-less, well - upright. A lean to one side or the other can add a surprising amount of resistance when you are trying to pull the gate tight. I have found that I can usually jump them into position with a sharp upward jerk (or two) on the end upright.

Now here's a more subtle trick to use when that top wire loop just doesn't seem to reach over the end upright: pay attention to the position of the bottom wire loop. If it's angled downward, because the upright hasn't been pushed into it all the way, then it will be pushing the upright higher, so the top wire loop has to reach higher to clear the top. The gate will also be out of alignment, so that you have to stretch it even tighter. I usually put the upright into the loop and then straighten it up some, and work that bottom wire loop upward with the toe of my boot until it's lined up well. 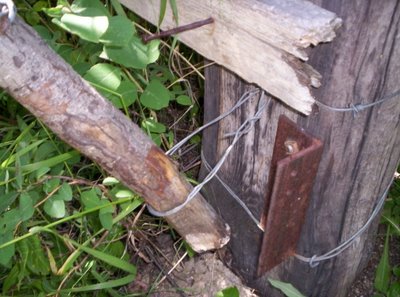 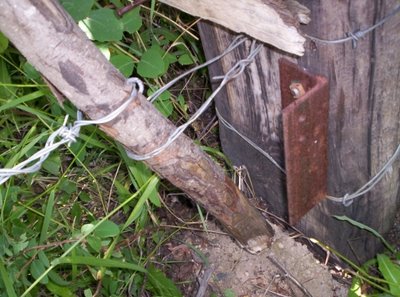 Better
If you still can't get the gate closed (and the cows are coming, and people are shouting, and oh-no-there's-the-bull!), don't worry, there's still another trick to learn. This one involves using your own body to best advantage.

Chances are, your first attempts involved pushing the upright closer to the closure post. Maybe you had one hand on the upright and one on the closure post, trying to bring those two hands closer together, and as you got more desperate, perhaps you tried to guide the wire loop with your teeth. 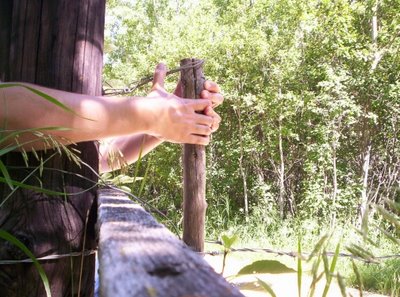 Get on the fence-ward side of the closure post, shoulder up to it, with your arms reaching around it to grasp the end upright and pull it straight towards you. Your thumbs can guide the wire loop into place without struggle or fear of pinching.

Apparently this stranger, struggling to open the gate, hasn't heard about that last trick. We'll just let her wear herself out and go home. 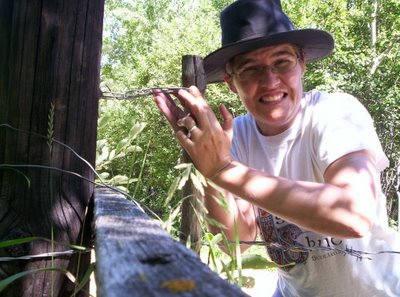 If you've been paying attention, you can easily see how some of my tricks for closing gates will also help with opening them. But I won't spell any of that out here. If somebody happened to use my advice to get a gate open, and then left it open, I might have a farmer after me with a post maul. And the more gates that are carelessly left open, the more farmers just tighten up those wire loops a little more, so that my little tricks aren't enough anymore - you also need the farmer's brawn, or another advantage which I won't mention here.

A few other notes about gates:

If you find a gate that is closed with a length of rope or chain wrapped around the closure post and the gate upright, be very careful to note how it is fastened before you release it, so you can get it back the same way. It can be a bit easier to manage than a wire loop, since you can get it wrapped loosely and then pull to cinch it up, but you may not get it quite as tight as it was to start with.

If you want to make a wire gate easier to close, consider a strap-steel lever device, like the one shown here (pdf).

While I was looking for illustrations, I found an interesting article about different kinds of gates. I like the looks of the hinged wire gate, with the rigid diagonal, that uses the weight of the gate to pull the wires tight. And the one-way wildlife gate, that lets trapped deer escape from an orchard.

Of course, the easiest kind of gate (if you're driving something with four wheels) is the cattle guard. A steel frame supports a series of pipes across the road, level with the road surface, so that there are gaps between the pipes, and an empty space underneath. Vehicle wheels easily span the gaps, but cattle hooves are too small, and cows don't usually dare to try to balance on the pipes. We used to play on this gate while we waited for the school bus, balancing on one pipe at a time, or bracing a boot sole across from one pipe to the next. I've seen Garth ride his bike straight across it, but I never quite found the nerve for that. It's not the best picture, but you can see the plants poking up between the rusty pipes. There are better pictures in that article I mentioned above. 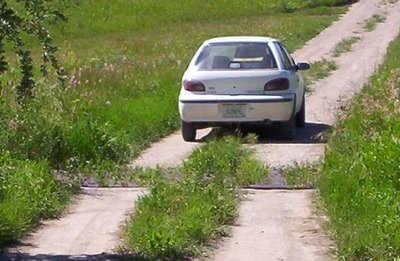 Nice post, chock full of good advice. I'm a tour guide in the Big Muddy and have to deal with one wire gate sans posts in the middle so keeping tension on to prevent tangle is important. Lots of people offer to open the gate for me. This is the source of much amusement.

The best are the Charles Atlas isometric types who use their hands, arms akimbo to push the posts together only to find that they need a third hand to slip the loop off.

Depending on how tight the gate is reaching around the post and using it as leverage is the best method, most can be done with one arm, using the other to slip on the loop.

Keep up the good work

I'm with you on the open/close question - leave it the way you found it!

I've been, through my work, in situations where I've had to open and close gates, mainly to get to ponds on private land where we raise fish. I really hated the flimsy ones made out of barbed wire with a few uprights.

Last gate I had to fool with was last year while hunting with my son. We had hunting packs, rifles, were walking on a sheet of ice on a hillside plus the said gate was a single ELECTRIFIED strand with a spring loaded connector.

Thanks Brent - let me know when your site is up and running!

mum - seems simple enough, doesn't it? That rule could apply nicely to more than just gates.

Deb - I had to open countless gates in the course of my work over the last ten years. The fewer uprights, the worse they tangle. But I was pleasantly surprised by an all-wire gate this summer - barbed wire with a few uprights of twisted plain wire. It held its shape beautifully.

Harold - I once took hold of an ordinary looking wire gate, only to discover that some of the barbed wire strands were electrified. If I recall correctly, I omitted that land from our sampling program. Another guy on our crew, from an urban California background, found a mysterious (to him) single strand of wire suspended across a field and tried to lift it to drive his quad underneath. He told me he couldn't figure out why a wasp kept stinging him every time he grasped the wire!

I felt a little bad that I hadn't warned him, but it never even occurred to me that he might not have heard of electric fencing.