Last year in a graduate course in education, I searched for childhood memories of significant moments in nature. Trouble was, most of my memories were in natural settings - significant moments in cities or indoors would be the exceptions! I found myself writing instead about the places we frequented, our ways of being there, our rituals.
There was one special moment that became a treasured ritual. We waited for it in late winter, watching from the school bus for the first glimpse of a dark patch amid the snow on the crest of a steep ridge that we called the South Slopes. Then off we would go, down through the meadow and up, up, up the ridge, toiling through snow that rolled unhelpfully under every step.
Oh, the joy of that last step from the shifting snow to the bare, solid earth! We stood on it, jumped on it, danced on it. We shouted and laughed. We lingered, stilled again by its immense stillness.
When would that have been? Early March?
Today I walked again in sloppy felt-lined snow boots, down by the meadow and up the ridge. I toiled a little, but the snow was not deep. I reached the summit, took a picture of the lifting fog, and then, through my viewfinder, saw my feet on the bare ground.
Trouble is, this winter, the bare ground is commonplace. I bet I could have stood on a bare patch on that ridge every week. The novelty would be to see it blanketed in white. 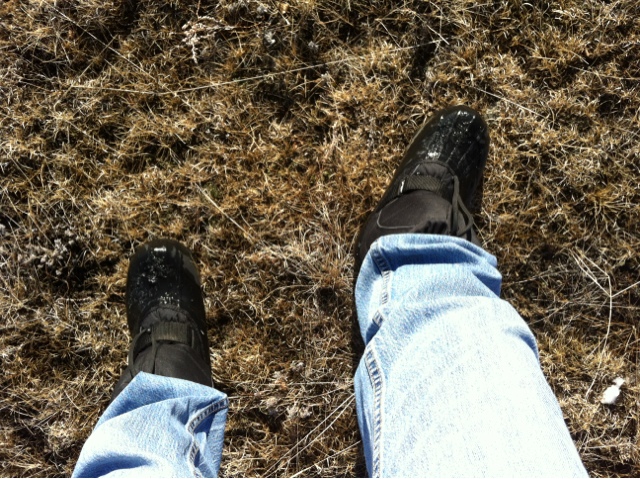 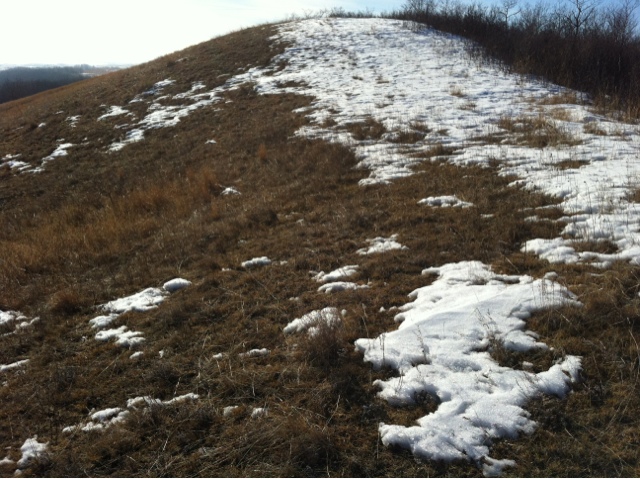